Perhaps you have become aware in recent times of a bit of a "to-do" about the issue of child beauty pageants, sparked by such cultural phenomena as hit TV show Toddlers and Tiaras, as well as a recent such pageant held in Australia, and of course moralising do-gooders who for some reason want all our children to be ugly. I mean who would not LOVE a child like US pageant star Eden Wood? 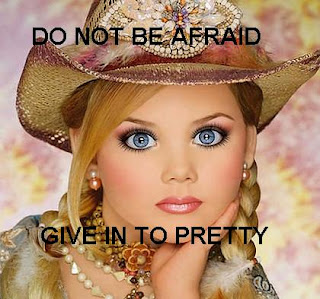 Anyway I wrote on the subject for New Matilda:

It's Time To Let Kids Be Adults

As did visiting British journalist, libertarian and two-legged mouth Brendan O'Neill, in even more strident and convincing mien:

That O'Neill piece is filled with gorgeous lines and gentle wisdom, but probably my favourite bit is this:

"These children are absolutely being put in harm's way", declared child psychotherapist Collet Smart, who somehow, by osmosis maybe, seems to know better than parents themselves what is good for their children.

Ben - you are my new favorite poet, comedian and commentator ;-). Love your work and I'm looking forward to seeing future pieces.

Why Collett! How lovely to see you here!

Hello Ben. That photo of the girl is disturbing. Your writing is funny. Also, I don't like Master Chef but if not for it I probably wouldn't have found your blog, which would have been sad... albeit a sadness I wouldn't have felt... which when you think about it is a pretty cool kind of sadness.

I read that stupid article. I left it for other people to respond to, because I knew others could do it better. So, thank you :)