You probably know that Masterchef - or as it is known in my world, #masterchef - has entered "Finals Week", the week when we get down to the nitty-gritty, come to the crunch, and are struck about the head and shoulders by the rubber on its way through to the road.

For a poignant description of the opening of Finals Week, check out my Sunday night recap here.

But in addition to that piece of - yes, no false modesty here - genius, I am also celebrating Finals Week with a COMPETITION!

A competition I tried to run before, but nobody entered so it didn't really work out. Hopefully it will work out this time.

The competition revolves around my sort-of-a-hit book, Superchef! 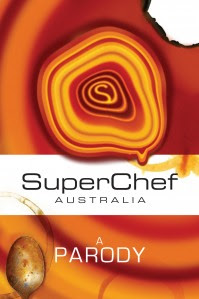 Specifically, it revolves around the recipes contained in the book: recipes like Myst's Apple and Cabbage Puree; Esther's Stress Water; Steve's Cyanide Noisettes; Tenielle's Suburban Parma, and many more.

What I want YOU, my faithful readers, to do is:

1. Choose a recipe from the book.

3. Take a photo of the results.

4. Send that photo to pobjie.ben@gmail.com

All photos sent in will be published on this very blog, and the BEST efforts - as judged by an expert panel comprising me, my wife, my son and maybe my friend Cam - will receive a very special prize: a SIGNED COPY of my anthology Handy Latin Phrases, known among "fans" who I just made up as "the Pobjie bootlegs". 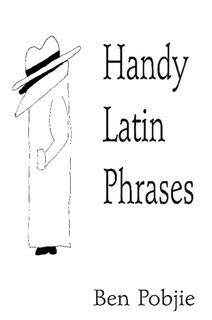 This early opus of mine contains such works as "The Black Cat", "The Man Who Looked Like a Fish From Certain Angles", and "Franz Kafka, Grocery Boy", and is a rarity in Me-lore.

So there is the contest, and it is just waiting for you eager beavers to get in the kitchen and start entering. Here is an example of the sort of thing you might submit, a beautiful example of Tenielle's Suburban Parma: 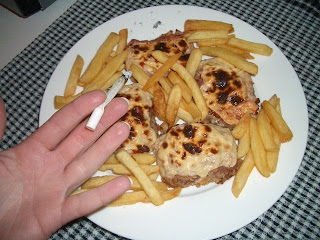 So what are you waiting for? Get cooking, and you are in with a chance of not only fabulous prizes, but GLORY!
Posted by Ben Pobjie at 10:47 PM