A Matter Of Concern

In particular, today I am worried about Fred Nile.

Now don't get me wrong - I have nothing against Mr Nile. I realise there are those who would dub him a creepy liver-spotted hobgoblin whose diseased mind is fixated purely on the goal of making others as miserable as his own decayed psyche has caused him to become; but I do not condemn in this way. I say live and let live, irrespective of whether you are an ethically deranged half-man half-toad with as much moral sensibility as a pubic louse and all the capacity for compassion of a paedophiliac vulture. I pride myself on my willingness to tolerate and accept the lifestyle choices of all my fellow citizens, and if (I say IF) Mr Nile's personal preference is to live his life as a shrivel-hearted, wither-witted, soul-stunted bible-frotter with a strength of belief in his own dogmatic ideology of anti-human hatred that is matched only by the intensity of mania which he brings to his perverted obsession with his own hopelessly malformed view of the sexual behaviour of complete strangers - well, that's no skin off my nose. I pass no judgment. That's for Our Lord to do.

But what worries me is when people try to promulgate their own particular lifestyle choices into the public sphere. I am rather afraid that Fred Nile, by wilfully being Fred Nile right out in public where everyone can see him, may be sending a message to our society that being Fred Nile is somehow acceptable. After all, it is one thing to be Fred Nile in the privacy of one's own home; it is quite another to be Fred Nile where impressionable children can see you.

And it is, as always, the children who I am concerned about. Is it really fair to a child, at an age when their values and opinions are not yet fully-formed and they are extremely susceptible to suggestion from adults and the mass media, to expose them to the Fred Nile lifestyle? The danger is that they may absorb the idea that being Fred Nile is perfectly normal, that it is, in fact, a natural thing to be. Is that the sort of thing we want to teach our children? Shouldn't we wait until they are fully grown and let them make up their own minds whether being Fred Nile is a good thing?

I mean, look, I am no prude. I am no wowser. I am no, for want of a better word, Celia from Home and Away. I think that Fred Nile should be free to live his life without harassment, and even to marry and have children if that's what he wants for himself. I just object to him shoving himself down our throats. There is such a thing as decency, and I think it betrays a shocking decline in the standards of civilised western society that in our once decorous and respectful community, we now barely bat an eyelid at the sight of someone blatantly and shamelessly being Fred Nile, in broad daylight!

I can remember a time when being Fred Nile was purely a matter for consenting adults behind closed doors. Now it seems Fred Nile is everywhere, on our TV screens, in our newspapers, even in our churches - surely the one place one would have thought one could rely on for an upholding of community standards. The danger we face is that this saturation of Fred Nile, forever being rammed into our faces, will result in a situation where being Fred Nile becomes fashionable, or "cool".

I just worry that if this trend continues, if we keep on sending the message to our youth that being Fred Nile is not only normal, but also, somehow, admirable, we run the risk that they will grow up wanting to be Fred Nile themselves. And is that what we really want? Is that the future we want for our kids?

Look, I'm a realist. I know it's the 21st century and there are some concessions we must make to the modern world. But surely, even while accepting there are certain social phenomena that will always be with us, we can stand up for deceny and moral rectitude? Surely we can fight to keep those less desirable aspects of modernity in their proper place, quarantined from the activities of upright citizens?

That's all I'm saying - I don't want to ban Fred Nile, I just want to make sure that if people want to be Fred Nile, they keep it in the right and proper place - their own homes, and parliament.

Let's keep pushing for the Australia we all want to live in. Don't let YOUR children get sucked in by Nile-ist propaganda.


If you'd like to know more about the Movement For The Insulation Of Children From Fred Nile, contact NSW Premier Barry O'Farrell for a nice chat. 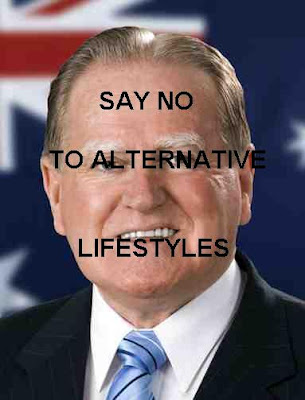 Brilliant. Beautiful. The third paragraph had me cackling.

Impressed beyond belief, loved it!

Bloody hilarious. Does Fred Nile get a right of reply? Cause I'd love to his response to this.

Is "one of your best ever" too strong? Hmm, no, I think it is understatement. Bloody beautiful Ben, I wish I'd thought of it first!

Fantastic stuff! Such a shame it's too clever for the Nile-ists to grasp. What a tragic waste...

Poor Fred Nile. Everything he says about the subject of homosexuality gives me the impression that, during what must have been an incredibly miserable, repressed, stifled adolescence, he once thought for five seconds about what it would be like to touch another boy's dick, and he's been running scared from that ever since.

Well said, Ben. Is destructionism the new creationism? I think Fred might be a believer.

Hmm, Me thinks ye be taking the proverbial! Grr Gays something something.

Couldnt have happened to a nicer Nile...