And Another Bloody Thing

Probably, had you been asked a week ago, "Who is Ben Pobjie's least-favourite person in the history of the universe?" you would have said, "Oh, easy, that would be Kate Middleton of Toowoomba, who is famous for not being engaged to a prince or having any interesting characteristics whatsoever, and whose presence in actual newspapers heralds the coming of the Beast."

You would have been right.

For now, the not-ever-going-to-be-a-princess has been usurped, by Daniel Brew, the teenager who crashed a press conference to tell Australian captain Michael Clarke how to bat.

Secondly, Daniel Brew, put your manners back in. I realise you're just a kid with a dream: a dream to get your picture in the paper without having to do anything useful, productive or worthwhile, but you're dumb and you're obnoxious and you should shut up and show some respect to the captain of your national cricket team.

Especially given Brew plays in the fourth XI competition of the Geelong Cricket Association, which means that as a cricketer, he is not good enough to make the third-best team of a local club in a minor suburban competition. How's keeping your head over the ball working for you down in the fourths, Danny?

Let's tally up the scores so far:

But look, it's only fair to see what the critique of the lad actually was, to see if it has any merit. Let's see...

OH MY GOD HE IS A GENIUS! It's hard to believe that Daniel Brew, at the tender age of seventeen, is capable of reading a "Cricket for Beginners" pamphlet.

"Playing the ball under your nose"? That's his advice? That's the insightful analysis that got this uppity little rind of twonk into the papers? Seriously? That's it? That's all he's got? A technique tip that you learn at your first training session in Under Sixes?

Wow, that'll blow Clarke's mind, won't it? I bet he never even THOUGHT of that!

And what's that? Oh you have more advice, Daniel? Do let us in on your wisdom.

WOW! How does he come UP with these? How can we neglect to laud the brilliance of this precocious young Mozart of cricket, with this revolutionary idea that will turn conventional sporting wisdom on its head: "When you are out of form, why not practise a bit?"

I can see Clarke slapping his forehead: "Of course! Practise batting! It seems so obvious now I think of it, yet it took the wisdom of a child to make me realise that it might be a good idea to PRACTISE the skill by which I earn my living and which the vast majority of my life is devoted to. D'oh!"

And look, the boy genius has kindly DEMONSTRATED for us his secret to success! 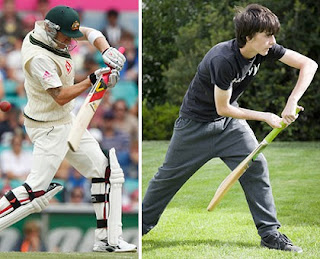 Isn't it amazing, the lad's skill? Isn't it incredible how he is able somehow to pose for a photoshoot in a park without any opposition or need to actually hit a ball, with perfect technique, while Michael so-called Clarke is unable to achieve such a perfect stance in the middle of the SCG while trying to hit a ball travelling at 145km/h in the middle of the bat in front of a crowd of thousands with a team of fielders waiting to prey on any mistakes and with the knowledge that failure puts his career in jeopardy?

Just how DOES Brew do it, and why can't Clarke replicate that perfect textbook technique every time a photographer takes a picture of him?

Sign this kid up as head coach immediately, CA, he's got answers for everyone. "I think Mitchell Johnson should bowl straighter". "The slips should try not to drop the ball". "Ponting should bring on a bowler who will take a wicket".

Oh, thank god. I've been shitting myself over the past few days over this kid.

I actually found his initial comment mildly bearable, but what's worse is that when the little dipshit was posing for the photoshoot beside nets practice, he asked Clarke if he could borrow his bat, and when Clarke refused, the Brewster delivered the zinger of all zingers, "Why not? You don't use it in the middle anyway."

Top stuff, that. He's got a mighty future ahead of him mouthing off from the sidelines, I'm sure.

Oh yes, Aaron, that's the moment that put it beyond all doubt - if indeed there was any doubt - that the whole thing was just a stung to get himself in front of a camera.

Actually the problem with Mitchell Johnson is that he does bowl too straight—need a bit more movement through the air. (but what would I know!).

Oh I love it when you blokes get your stomp on.

There's the trouble, Anon, with multiple meanings of "straight". It can mean:

2. Without, as you say, deviation, "straight" as opposed to "moving sideways".

3. On the line you want it to be on, "straight" as opposed to "wayward"

England need to poach this kid and put him at Gully to sledge the Australian batsmen.

You should write funnier