This was on PAGE 1 - that is, the FRONT PAGE - of the Toowoomba Chronicle of the 18th November.

Our Kate finds her prince charming
TOOWOOMBA'S own Kate Middleton is set to play the part of princess and thinks she just may have missed her calling in life.

And she may have found her own Prince Charming.

Being secretary of Toowoomba Turf Club comes with the occasional glamour moment, but it just doesn't seem to come with an 18 carat engagement ring crafted from sapphire and diamonds.

Ms Middleton said there had been quite a buzz surrounding her name, with some of Toowoomba's finest young ladies marvelling over her name tag at the Weetwood Handicap race day

She has the same name?

That's the story? THe biggest one they could find? A woman in Toowoomba has the same name as another woman in England?

"There has been quite a buzz about my name"? Are you serious, Kate Middleton? You can actually say something like that without shame burning the inside of your skull?

Who the hell is emailing and calling this woman? What do they say when they call her? "Congratulations"? "Nice work"? "Oh I saw in the paper how a woman called Kate Middleton is about to marry Prince William - is that you?"

I mean, seriously, do people think it might be? Do they think the Kate Middleton they've been reading about in New Idea might be their pal Kate from Toowoomba, who just forgot to mention she's been dating Prince William since 2001? "Kept that very quiet, didn't she? Mmm makes you think."

Or alternatively, do they actually think having the same name as someone else is an achievement? Are they "emailing and calling" to tell Kate they're so happy for her that, after all her years of hard work, she's finally made it? "Sharing a name with a celebrity - it all paid off in the end, huh Kate?"

Let us not dwell on the fact that Ms Middleton is pictured on the front page (!!!) wearing a CROWN and adopting the sort of facial expression you would pretty much expect from someone who thinks she's special because her name is the same as somebody else's.

Let us instead dwell on the fact that apparently other women were "marvelling" over her nametag at the Weetwood Handicap Race Day, which, it has to be said, seems to be very aptly named.

"OMG look at that nametag! It features a combination of letters I find familiar! Can I have a photo with you famous lady?"

What a bunch of race-going dickheads.

Well that is just a blatant and shameless lie.

And COULD there be another Kate Middleton wedding on the cards? Well, let's examine two relevant points:

1. Probably not, because she has a partner who gives her friendship rings. So don't hold your breath, "Princess".

I can think of a hundred ways in which the royal family has made life on earth less pleasant. But the existence of a front page story in a daily newspaper about a random woman who happens to share the not-particularly-unusual name of a foreign celebrity who isn't very interesting or significant herself...is at the VERY TOP OF THE LIST. 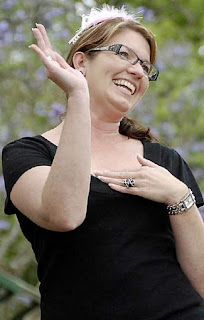 That newspaper has never been the same since I left it gleefully in 1986 at the end of my cadetship!

I love you Ben.

This is why I love regional papers. But the Northern Territory Times with its shock horror stories about crocs, etc, is even better.

and I bet someone was SCOURING the electoral rolls to find someone called KATE Middleton ...

Didn't you know this whole business of the Royals and a wedding is a very important thing in the lives of all Australians? We wait on baited breath for further details as they are released, our whole existence is hinged on what the Royals are doing RIGHT NOW!

why do you have to kill her 15 minutes of fame ben? why? what if this is all she has? this may be the peak of her popularity in life.

James, it is because I am a cold, cold bastard.

Are you serious, Stephanie? That is AWESOME.

Tim, do you know the Text The Editor page of the Gold Coast Bulletin?

Marieke, there was a time when the thought of you saying those words was just a foolish dream. I'm...I'm just so happy!

I was given a replica of Di's ugly ring once. Everyone at work kept saying it was a black onyx and not a sapphire and I was really, really touchy about it

Anyway, that should be their next story. Someone with the same looking ring

My mum has the same looking ring. A replica from when they first made them at the time of Charles and Di's engagement.

An original replica. So ahead of her time, my ma.