How To Not Rape People: SPECIAL NRL EDITION

Some of you might remember a handy guide to avoiding being a rapist that I posted a little while ago.

Many people found this extremely helpful in their own lives as they struggled to find a way to not rape people. However, unfortunately it has come to my notice that the original guide was far too narrow in its scope. Recent events have shown that certain segments of the wider community need the Guide to be adapted to their special needs. With that in mind,

5. When you go home with a dog, try not to have sex with it until after it says it'd like to. Which it won't, because it's a dog. Even if the dog followed you home of its own volition, follow this role.

6. Practise not having sex with dogs. I know it's hard - sometimes you just look down and it's like, whoops, I'm having sex with this dog, how did that happen? But I bet with a bit of concentration and discipline, you can actually manage to avoid having sex with someone, even when they're in the same room as you and they have four legs and a tail and fur. It's true! Anyone can do it! Why, last week I met at least five dogs who I actually didn't have sex with, without causing myself any particularly severe internal injuries.

7. When you meet a dog who doesn't want to have sex with you, don't have sex with it. I realise I already said this one, but that was five steps ago, and I have a feeling some of you guys might have slightly short attention spans. 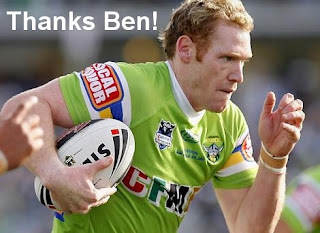 Been sitting here for a coupla minutes trying to come up with something. I got nothing. Someone drop a toaster in their jacuzzi.

"I have a feeling some of you guys might have slightly short attention spans." LOL!

Keep up the good work Ben - even if the ABC don't appreciate it, most of your readers do.

This is brilliant (and hilarious)!

Yes, nice work again Ben. I am fed up with the excuse "I was drunk". I don't know about you, but when I get drunk I don't rape dogs, bash women, glass guys in a bar, drive at high speed, tell racist jokes, smash up motel rooms, defecate on the street, or do any of a lot of obnoxious things I also don't do when I'm sober. Being drunk doesn't turn you into someone else. Nor does it give you an alibi for doing things you don't do sober.

Sure David. You have to be make allowances though for these footy players who seem to have the 'slightly short attention spans'. They just don't seem to make the connection between their stupid actions and the massive consequences - sponsorships, careers, relationships, life etc. As soon as they wise up, they retire and a new crop of young stupid blokes move up to fill the spot.

Pretty much commenting because the word verification is 'wieners', and who wants to waste that?

However. It says a lot about the world that you had a previous sports 'rape' column ready for adjustment. Still. A dog? Really? He really had sex with a dog? What is the MATTER WITH THESE PEOPLE?

As Joel's lawyer, I would like to read a prepared statement on his behalf:

"I would like to express my deep disappointment with Twitter, and in particular Twitpic, for allowing this oft misconstrued image to 'go viral'."

"I was having a splendid soiree with close friends after making a huge personal monetary donation to the RSPCA. Spirits were so high we even went so far as to share a (light) shandy."

"As celebratory games of Whist and Scrabble continued on into the evening, I felt a responsibility to stay awake and ensure that no gambling nor scoring disputes took place."

"Due to it being past my usual bedtime of 9.00pm, I began to feel disoriented and weak, and it was then that a friend suffering from a previously undiagnosed intracranial-pressure-related seizure inadvertently buffeted me to the floor as I valiantly (and successfully) attempted to prevent him swallowing his tongue."

"The elastic of my pants caught on the door handle as I fell, snapping, and shamefully exposing my nether regions as I slumped, mortified, to the ground."

"A former Police dog, retired (with commendations), was startled by this commotion, and reacted instinctively due to years of training. The dog mistook my exposed wee-wee for a weapon, and attempted to 'disarm' me."

"It was at this moment as a comrade frantically dialled 000 on a camera-phone that the misleading photograph was accidentally taken, and subsequently posted online."

"Thank you, for taking the time to listen to the facts of the matter so that the record can be set straight and the book finally closed on this unseemly misunderstanding."

Every guy needs to read this and re read this. Men in the US military can't read so someone else should read this to them.
http://www.theusmarinesrape.com/FaceBook.html