As an atheist myself, I often find myself licking the blood from my fingers and thinking, Gee, wouldn't it be nice if there was more understanding in the world for those with alternative faith choices? Every day in the media I see another misconception about atheism being perpetuated by heartless believers who see fit to pass judgment on us without even going to the trouble of attending a Baby-Que to see for themselves what we're all about.

So I think it behooves me to here explode a few of the myths about atheists floating around out there.

1. ATHEISTS ARE JUST ANGRY AT THE CHURCH: This is simply NOT true. We are not JUST angry at the church; we are angry at all KINDS of people. Like our parents, the government, people who are happy and secure in our relationships. I am so SICK of atheists being painted as one-dimensional, as if it's just ONE thing that causes us to reject all sense of decency and social propriety. We have LOTS of motivations for our blind hatred, OK?

2. ATHEISTS WANT EVERYONE TO AGREE WITH THEM: No, we do NOT. We want SOME people to agree with us, sure. But MOST people we actually want killed. It's so unfair when people say things like, "Oh atheists, they're just trying to force their message down our throats". Not true: we're actually HAPPY if you disagree with us, because we're planning to exterminate you at our monthly Atheism Plot Meetings.

3. ATHEISM IS A RELIGION: Not at all - atheism is not the sort of structured belief system usually designated as "a religion" - it is in fact a very narrow set of beliefs more properly dubbed a "death cult". It really ticks us off when we get lumped in with the religious, when our soulles blend of nihilism and masochism is really very distinct.

5. ATHEISTS ARE SENT BY SATAN TO TEMPT GOOD PEOPLE FROM THE RIGHT PATH: No, we tempt people from the right path purely for kicks.

6. ATHEISTS ARE ALL HOMOSEXUAL: Actually, many of us are heterosexual. of course, we indulge frequently in homosexual ACTS, because we live only to gratuitously offend people's sensibilities, but we don't ENJOY them. We don'y enjoy any sexual acts, since sex is only enjoyable with a person whom you love, and atheists are incapable of love.

7. ATHEISTS ARE ACTUALLY MUSLIMS IN DISGUISE WORKING TO SUBVERT DECENT CHRISTIAN SOCIETY: We are NOT Muslims. We just work for them.

8. ATHEISTS WORSHIP SCIENCE: None of us worship science; we all know science is rubbish, it's just something we came up with one night when we were trying to think of a way to corrupt the morals of young people. We do, however, worship Richard Dawkins, because of the mind-controlling injections he gave us.

9. ATHEISTS ARE UNHAPPY: As atheists we are incapable of ANY emotions, good or bad.

10. WITH NO SOURCE OF ULTIMATE MORAL AUTHORITY, ATHEISTS HAVE NO REASON NOT ROB, RAPE AND MURDER PEOPLE ALL THE TIME: Rubbish! We have a very GOOD reason: sometimes we get tired. 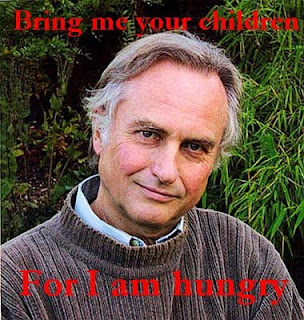 Very amusing and factual at the same time :)

As an athiest who works at a bookstore, I constantly seek to undermine Christianity by hiding the religious books behind The God Delusion. I am glad you are helping to make clear to people what we are all about.

Sheesh, Ben. That much truthiness and you'll be drummed out of the Evil Atheist Conspiracy (Not that There is One).

Love the 'sometimes we get tired'. :D

This is a much scarier version of that picture of Richard Dawkins.

A little ripper Ben. Mind you the second pic of Richard Dawkins was indeed scary.

Gol Durnit! You weren't supposed to actually TELL people about the Plot. Now how am I going to trick people into letting me eat their babies? Sheesh.

You know, we're just as capable of hating our own. Like, if you give away all our secrets....

Oh, it's funny because it's true.

Excellent. This is the sort of factual, evidence-based analysis I crave (I crave slightly more than the blood of Kevin Andrews anyway). Question I've been meaning to ask you Ben: is 'Graeme Bird' an alter-ego of yours?

Amazingly, Barty, I have no alter egos. Graeme, as unlikely as it seems, is all his own work.