There has been much discussion this year of the merits or otherwise of the plays of David Williamson, with luminaries such as Jason Whittaker of Crikey's Angry Theatre Review Department, Annabel Crabb
of the ABC's Reviews of Reviews Department, and even Miranda Devine of News Ltd's Miranda Devine? Seriously? Department, weighing in with their opinions on whether Williamson is a national treasure or in fact if he is another thing which is not. Given that most people think of me as a combination of Devine, Whittaker and Crabb divided by three and averaged out over the duration, I think it well-behooves me to take a stab at analysing this peculiar cultural institution to decide beyond all doubt whether it's worth doing.

I am in a uniquely well-qualified position to comment on Williamson’s plays, since I have never seen any of them, which makes me totally unbiased. I have, however, seen a bit of Don’s Party – the bit where Graham Kennedy is nude – and two bits of Emerald City: the bit with the hose, and the bit where Ruth Cracknell laughs. So I have a good overall feel for the vibe, while lacking the dreadful baggage that comes with knowing what I am talking about.

The simple fact is that David Williamson is the greatest playwright this country has ever seen except for maybe Eddie Perfect or that other one who nobody remembers. However, it is unfortunate that despite this, Williamson has degenerated from a theatrical giant to a sad and pathetic parody of himself who embarrasses us all not only with his writing, but his very existence on the same planet as decent people like ourselves. How did it come to this, that the most brilliant genius ever is now retarded? The answer is probably that he was never very good anyway and the first part of this paragraph was wrong, or possibly it is more complicated than this or perhaps not. Let’s examine the issue at length and with a clear sense of which sections of the community are stupider than us.

First of all, there can be no doubt that Williamson is popular, so doesn't that make him good? Almost certainly yes, but then again he's definitely bad, so this theory doesn't hold water. Or does it? Williamson himself certainly thinks it does, writing an elegant article in which it holds water as much as the next pitcher or small jug. Of course, we should take his opinion with a grain of salt, or possibly even an entire shakerful, because naturally he would say that, wouldn't he? Yes he would, because he's the one who profits from the erroneous perception that he is any good at anything.

But then why do people go to his plays? Because they're idiots? Yes, and no, is the answer, or answers, to this question, or questions. While it's true that everyone who goes to the theatre is an idiot, it's also true that I don't know much about art, but I know what I like. And what people like is David Williamson, and if a play is entertaning, what more do you want? Nothing, that's what, and the whole reason you don't like the plays is SNOBBERY.

Snobbery is what people do when they are scared to like popular things because they won't feel special. But what I would say to them is, you're special just the way you are and you don't have to hate beloved playwrights to be it. Or alternatively, you're not special and never will be so shut up. Either way, stop doing snobbery at people, especially at David Williamson, who is trying to chronicle our times in a way that is accessible to the average theatregoer and also Bob Hawke.

If Williamson doesn't do it, who will chronicle our times? Mungo MacCallum? Don't make me laugh. 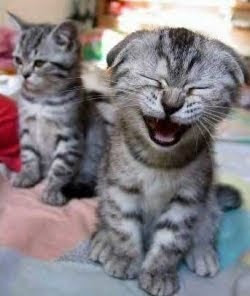 How long do we have to put up with cultural elites denigrating our icons, and non-elites denigrating the elites? It is a vicious circle, a snake eating its own tail, much like Williamson's new play, "Don's Snake Eats Its Own Tail", in which Don and his friends gather at his house to watch the telecast of the NSW state election in blackface.

Why does this play work? Because it is RELATABLE.

Why does it not work? Because every three minutes the entire cast sings the national anthem and scurries about the stage squeaking, which puts a crimp in the narrative.

But maybe Australians want crimps in their narrative, or perhaps not. Who can tell? Almost everyone, it is not difficult. That's the whole problem: thinking that complicated issues are quite beyond the grasp of the wider population, just because they are.

The point is, why don't we actually ASK theatregoers what they want from a play? Well, why would we? Theatregoers are stupid: they go to David Williamson plays. But maybe we are stupid for judging them. It's hard to tell, but maybe we could have a stab at it by going to see one of these plays for ourselves. We won't though, because we're not stupid. But that doesn't mean that liking David Williamson makes you stupid, it might be other way around or maybe a bit of both. One thing's for sure, the answer lies somewhere in the middle. Or to the left. It all depends which leg you put your trousers on with. As examined in Williamson's play Trousers, in which Andrew, a suburban lawyer, falls in love with a wild ape with hilarious consequences.

In a way Williamson's plays are a wild ape, and we are suburban lawyers, and Miranda Devine are hilarious consequences. But on the other hand, what about Barrie Kosky? What does he think? Perhaps this white lion can tell us: 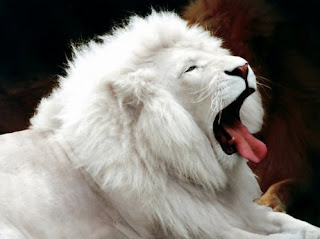 But let's not pretend anyone has all the answers. Except Williamson, who has been in theatre for over 40 years and knows his way around an orchestra pit. But is an ability to read maps the only relevant criterion for a great playwright? Surely not. You also need a pen. Maybe it's Williamson's lack of a pen that has made him so bitter in Don Parties On, in which I am reliably informed there is a forty minute monologue on Viagra.

Still, it must be said that he puts bums on seats, an aggressive behaviour for which he should surely seek treatment, but cannot because he has no time due to his contractual obligation to write twenty nine plays every year and occasionally go on Q and A to show everyone his eyebrows. It is a busy life and he has no time to think about up-themselves wankers who only like plays if they have full frontal nudity and interpretive dance sequences about cowboys raping geese. Although do WE have time to deal with the delusions of an ageing halfwit scribbling down his random thoughts, sticking them to a piece of cardboard, dousing it in petrol, setting it alight and calling it a play? I don't know if this is what Williamson does, but I assume it is.

When it all comes down to it at the end of the day and all things considered in a broad sense, it is certainly true that Williamson's work, while popular, is preternaturally bad, while it is also true that nothing that is popular can be THAT bad, since people don't pay money for bad things except when they do, but then that is the exception that proves the rule, or in some cases, disproves, which only serves to emphasise the basic thrust of my crux.

So Williamson: Living Legend Of The Theatre, or Tired Old Hack With A Stupid Ugly Face? A bit of both, most of neither, and most of all, 110% of everything at once. 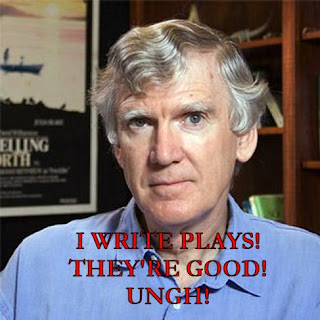 Oh God (or whichever deity is pertinent to the sensitivities of this audience), where do I start.

You missed "the fuck" between shut and up, would've really made it, but this may be the censored version.

There's more to say, but I can only fathom out, I'm happy I'm not from the city of the Arts... and here's one for ignorance, David who? Go get 'em Dave.

I think you're either correct or the other one.

"Snobbery is what people do when they are scared to like popular things because they won't feel special." I think that's a brilliant definition. or stupid. Or both. You decide.