A quick plug for an article I wrote for Crikey on the whales who threaten our way of life.

And a BIGGER plug for my brand spanking new show in the Melbourne International Comedy Festival!

Yes! After years of saying "I will do it", I am ACTUALLY doing it!

Ben Pobjie's Funeral will run from 6 April-17 April, except for Monday and Tuesday, at 8.30pm, and will take place in the lush surrounds of Blue Velvet Bar and Nightclub, at 60 Smith St, Collingwood, a lovely spot indeed.

Tickets are $20, $15 concession, but for the the first two nights, a SPECIAL PREVIEW PRICE of $10 applies!

What is Ben Pobjie's Funeral all about? It's about one man's quest to make sense of life and death, and get people to say nice things about him while he's still around to appreciate it. It will deal with such urgent issues as:

THERE WILL BE POETRY 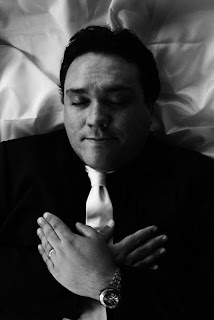