Did you miss the return of Q&A last night? I bet you're kicking yourself and thinking you'll feel really left out in conversations for the next week and nobody will be your friend and probably you will die.

No need! I was taking notes the whole time, and here present my official Q&A Recap/Cheat Sheet For People Who Are Too Lazy and Ignorant to Watch the Show. 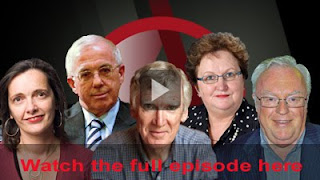 The show began with host Tony Jones, as usual, in the central panel position, a mooted move to a hovering cage above the set having been scrapped in pre-production. On his right sat Catherine Deveny, in between Graham Richardson and Gerard Henderson, or what political scientists call "the Corned-Beef Sandwich Formation". On Jones's left sat David Williamson and Amanda Vanstone, an estranged couple from Mount Gambier looking to rekindle the spark in their marriage.

The show began briskly enough, as Jones went around the panel asking each member in turn whether they were a climate scientist. Having established that, in fact, none of them were climate scientists, a hearty sigh of relief was emitted by all and the contestants shook hands politely in preparation for the coming hostilities.

The first question was asked by a thickset man in traditional Burmese dress, and was addressed to Graham "Graho" Richardson: "How often do you buy new underpants?" Richardson responded with a baleful glare and some graphic hand gestures, and the show was genuinely afoot!

The applause having died down, another audience member now stood to address a question to Amanda Vanstone. "Who is looking after your dog?" the young lady asked pointedly. Vanstone responded that Tim Fischer had promised to look in from time to time, which drew audible gasps from the rest of the panel. Vanstone immediately winced, as if realising her tactical blunder too late.

At this point Deveny leapt onto the ceiling and demonstrated her spider-walk, which was warmly appreciated by all.

Tony Jones himself asked the next question, in his guise as "Ol' Mother Standish". "How do you sleep at night?" he asked the panel at large, forcing each member to climb onto the desk and demonstrate their bedtime poses.

Following this came another question from the audience, this time posed by a small fawn in the front row, who asked whether anyone on the panel had considered the possibility that our main problem was that Australia was too wide in the middle? Vanstone responded that she had always wanted to cut some bits of the country off, whereupon Deveny leapt upon her and bit off her lips.

At this point Williamson thumped on the desk and announced he had written a play that everybody had to perform. Titled "Betrayal: A Farce", the play followed the adventures of Stanley, an inept yet loveable fieldmouse, who travels to the big city to visit his cousin Yvette, but on the way falls in with a gang of disreputable roughnecks who dub him "Prince Otto" and force him to perform peculiar favours for them. When he gets to the city, Stanley discovers Yvette murdered by pirates and his childhood home converted to a bikini carwash, where he gains employment and quickly dies.

Gerard Henderson is to play Stanley. The play only lasted five minutes, but still surprised with the frequency and volume of the obscenities uttered.

Following the play, the entire cast took their bows, and Henderson returned to his seat, where he sighed heavily and gazed mournfully at Deveny for the remainder of the programme.

The next question came from a super-intelligent hivemind who had come to the show as part of a group of Young Liberals. "Why not crack down on the Spaniards?" it suggested jauntily. To this, Vanstone responded with a vague shrug, Williamson with a lengthy dry retch, Richardson with a clever balloon animal trick, Deveny with an explanation of how a Van Der Graaf Generator works, and Henderson with a poignant declaration that he was "the saddest little bear in all the forest". At this point Jones broke in to admit that he, too, had often thought of cracking down on the Spaniards, but feared reprisals from the shadowy cabal of industrialists and master-criminals to whom he owed his broadcasting career. Seemingly in a candid mood, Jones then lit up a spliff and waxed eloquent on the question of "just what is it all about, y'know?" After several minutes Jones fell down behind the desk, never to emerge for the duration of the show.

Seeing her chance, Deveny then declared herself moderator, and demanded that Vanstone "shake what her mama gave her", to which suggestion Richardson reacted with a loud whooping sound and a sinister brandishing of electric clippers, the purpose of which he refused to divulge.

A brief, violent struggle between the opposite sides of the panel then ensued, before the heaving mass of punditry collided with the camera, causing the show to be replaced by a blank screen for several minutes. When transmission resumed, Henderson was alone in the studio, rubbing linseed oil into his abdomen and crying softly to himself.

Then there the credits.
Posted by Ben Pobjie at 9:53 AM

I have a suspicion, and only a sneaking one at that, that you may not have actually watched the show.

Oh to live in the universe where this actually happened..

Nice try Ben, very nice try, but no show with those 5 people on, and Jones, could ever be funny. With or without spliffs and linseed oil.

Argh! I can't believe I missed it!

Yep, that's a fair run down of events, Ben, except that you seem to be implying that Henderson was alive - maybe he spasmed when I blinked??

I tried turning the volume down for the last fifty minutes of the show but those scrolling tweets kept slapping me in the face so I relented.

I just wish they'd get rid of the politicians and comedians and give us something more cold compelling. Maybe some insurance commercials could add some depth? Or better still, how about having a lottery and getting Jo Blogs and his mates to not answer the frivolous questions? At the very least, the beer would taste better at this end.