In the Name of Balance

It has come to my attention that my latest piece on The Drum has attracted some criticism, along the lines of the assertion that while happy to bash innocent Catholics, I would never have the intestinal fortitude to bash people of alternative faiths.

Or as my most eloquent critic, "maz", writes, "It is not my opion but a fact that you have absolutely no legs to stand on"

To sum up, "You'd never have the guts to make fun of Muslims" is the prevailing attitude.

Now, I realise that the response of some of you readers will be, "What? Are they serious? What kind of fat-brained, worm-faced imbecile would actually possess the dunder-witted gall to voice this argument, given that it's not only factually inaccurate, but an intellectually bankrupt slab of nonsense that rests upon the premise that criticism of the flaws of an ideology or institution is invalid unless accompanied by criticism of the flaws of all other possible ideologies and institutions, as well as the assumption that a commentator or satirist should spend equal time on every potential target for insults or mockery no matter how obscure, inconsequential, anonymous, or devoid of impact upon broader society they are compared to others which exert massive influence over life in this country, are constantly in the public eye, and have recently received blanket coverage in print and electronic media across the country - in other words, commenting on things that matter to one's audience is invalid unless it comes with comment on things that don't? I mean, who are the morons trying to make this thrice-cursed abortion of an argument?"

Pretty harsh there, readers. Rude, almost. You should probably exercise a bit more tolerance before opening your mouth, if the above is all you can say.

Because for my part, I accept my critics' point, apologise for the hurt caused, and have decided to mend my ways. I therefore include below a quick compendium of religious attacks, which can be assumed to be appended to every future article I write on the subject of faith or gods. Ahem:

MUSLIMS! Geez, aren't Muslims crap? Praying five times a day? Geez, get off your knees and do some work. And covering up your women? What are you, gay?

JEWS! Man, do they ever shut up? Seriously, we GET it, Jews; life is hard. Change the record. And stop thinking you're so funny; nobody likes a smart-arse.

PROTESTANTS! Wow, don't get me started on protestants! What's wrong, too gutless to go full-Catholic? Pussies. You're just Catholics with bad taste in music, wankers.

MORMONS! Just piss off, Mormons. Get away from my house, get some better haircuts, and stop believing in idiotic stories about magic glasses. Everyone's laughing at you, dickheads.

HINDUS! What the hell is wrong with you, Hindus? At least Christians have the decency to only have ONE god to act stupid over. You've got like eighty thousand. Pick one, you indecisive sods! Stop trying to confuse us.

BUDDHISTS! What are they up to? Smiling and meditating all the time. They're planning something, crafty little bastards. And what's with the Dalai Lama? Get a new outfit!

SEVENTH-DAY ADVENTISTS! What the hell are you TALKING about? Crap!

BA'HAI! Oh like you're even a real religion. Look at that stupid apostrophe. You're stupid.

SIKHS! Get a haircut.

SCIENTOLOGISTS! Seriously? I mean, really? You're sticking with that? Really? Jesus Christ.

RAELIANS! Aliens? What sort of moron goes around babbling about aliens? People like you need to be restrained with leather straps. PSYCHOS! Don't come near my kids!

KABBALISTS! Look, we know why you picked Kabbalah, and we think it's PATHETIC.

ATHEISTS! Oh, you think you're so frigging clever, don't you? Well, know what? You're BORING. You just BORE us all, all the time. We LIKE church - if you don't like it, stick it up your arse. Go read one of your precious "books" and leave the decent people alone.

AGNOSTICS! Stop being such a bunch of old women. "Ooh, I don't really think we can tell either way, because we -" Oh just PICK ONE! Jesus you people get on my goddamn wick.

SHINTO! I don't even know what shinto is! It sounds bloody stupid though! I bet you're really stupid!

PAGANS! Oh come ON! We all liked fairytales when we were little - why don't you grow up, losers? Liking ugly clothes is not a religion!

WICCANS! Stop calling yourself Wiccans! We all know what you are, and we have the matches ready, Devil-whores!

ANIMISTS! You disgust me.

OK, I think we've covered most of the bases there. Please copy and paste this at the end of all my articles, and we should all be sweet.

And once again, I do apologise for any offence I may have given previously. Thank God the days of bias are over. 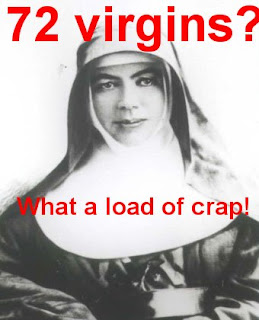 Ben, you have found the perfect solution to all those whiny complaints of prejudice. I DARE anyone to be offended by anything you say now! Bravo!

Well, O.K., but I bet you wouldn't have the courage to say that sort of thing about Zoroastrians.

I see you conveniently forgot about the Satanists. No-one has the guts to mess with Satanists.

Aahhhh, you make me happy.

You forgot Pastafarians, the loyal followers of the Flying Spaghetti Monster.
Damn it, I want my religion mocked too!
And Discordians, they should be an easy bunch to ridicule.
:p

As a Buddhist I'd like to say that that was completely unnecessary having a go at the Mormons like that, what are you a Zoroastrian or something. Go and get a real job you dope smoking Rastafarian.

Bugger, I always forget someone.

But honestly, you Satanists are all right!