I sat in my armchair long into the night, knocking back brandy after brandy, smoking endless cigarettes, wondering just how I got into this mess. Back when I first decided to try the Prime Minister game, it had all seemed so simple: the money, the power, the dames. It was only lately that I'd realised what a dirty game this "politics" was. It was full of lies and cheating and double-crosses, and it seemed damn unfair that someone was pointing that out at this late stage.

Maybe...I sighed, brushing ash from my Wallabies dressing gown. Maybe it was time to be a man. To stick to my principles, or at least to remember what they were. Peter had been good to me all these years, what with the budgets and the Guylians every Christmas...maybe it WAS time to give him a go, and devote more time to my true love: walking.

And that's when I saw her. Silhouetted in the doorway like some irresistible plum pudding. "Up late?" she purred, and I suddenly all the reason in me drained away like left-over pasta down a plughole.

She sashayed over to the armchair, her body swaying and slinking like a hydraulic cauliflower. That vegetable shimmy that had always gone to my head faster than a tabasco screwdriver and made me giddier than a cockchafer in an opium den. Whatever that means.

"Can I help you, Janette?" I asked, fighting to keep my voice steady and deep, as I had the first time I met George. He'd sure seen through me; I knew she would too. I knew that she knew that deep down inside, I was nothing but a scared little boy, playing at immigration policy to disguise the inadequacies that would see me laughed out of caucus the minute I let my guard down enough to allow Helen Coonan to pants me. The day was coming, I knew it, and I felt that certainty like an icy set of eyelashes butterfly kissing my heart.

"I don't know, John," she smiled sardonically. "Can you?"

I cleared my throat, trying to get rid of that damn greasy toad that squatted in my trachea every time this broad walked into the room. She put her hands on my shoulders, and my dog whistle went right off. "I've been thinking," I croaked. "I think I might hand over the leadership. To Peter."

Just for a second I felt her hands tighten on my shoulders, like a vulture with an ice-cream headache. Then she relaxed, and I felt her hot, spicy, parmigiana-tinged breath tickling my earhole.

"Peter?" she purred. "He hasn't got what it takes to be prime minister. He's not a," she drew in her breath with a shudder, "real man..."

She had me. I knew she had me. I had never been able to resist her incendiary rhetoric, since that first day when a young, dumpling-shaped ne'er-do-well had sidled up to my petrol pump, lollipop hanging from her lips, and fluttered her eyelids at me while she asked whether I knew anyone who could help her with a proposal for fundamental tax reform. That day my knees had gone from under me and I'd collapsed in a pool of lust and petrol, and I'd never really recovered. I'd always done her will, and always would.

She walked round in front of and, leaned over me, so close I could smell the Pantene in her irresistibly sensible hair. I could see the blazing, maternal fire in her eyes, and my fingers twitched with longing to reach out for the intoxicating flesh I knew was lurking just beneath that sturdy beige twin-set. She had curves in all the right places, and also quite a few extra ones, and all of my political career had been blessed and cursed in equal measure by my all-encompassing need to access that mesmeric acreage of womanhood and dance hungrily among those dimpled hillocks.

"You see, John," she whispered hoarsely, "I'm a woman with particular tastes. I like a man who takes control, who seizes power...and KEEPS it. Like Menzies...he used to get me so hot..." It was true. In the early years of our marriage she wouldn't make love at all unless I pretended to check the bedroom for communists first.

"I need a prime minister, John. Nothing else will do for me. I need a man like Menzies. A man who can last. Can you last, John? Can you last longer than Menzies? I could really go for that..."

I was almost done. My resolve was jellied and in a jar on the shelf. "I just thought...Peter had done such a good job," I faltered.

She laughed, a hard, sharp laugh, like the laugh of an economically rationalist hawk. "Too bad, John," she hissed. "That's a real shame. But maybe I'll go round to Peter's place, see what he's got to offer. Or if not him..." she paused dramatically, "maybe...Tony."

That was it. I couldn't take any more. "No!" I cried, leaping from my seat. "I'll stay! I'll be prime minister as long as you want. I promise!"

She smiled, cruelly, triumphantly. She had won, and was revelling in victory like an alligator gloating over a pot-bellied pig. "Good," she purred, and stroked my cheek. "Then maybe we can get down to discussing...workplace reform?"

I gasped. As those words puffed from those perfect, fig-shaped lips, and we melted into each other's arms, I felt the margins suddenly tighten in my southern electorates.

Lazarus was rising. In fact, Lazarus was positively throbbing. And there was only one woman who could truly satisfy him. 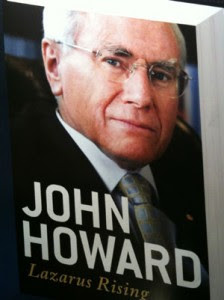 I love everything about it except the mental pictures you've drawn in my mind... I need to wash my brain out with Sards.

Incredibly hilarious and yet, very disturbing at the same time.

I have to agree with Trish. And is anyone getting the biblical reference with Lazarus? It makes me a bit queasy.

Crikey... I'll need a bex and a lie down after reading that. Nice one!

Thanks, now I won't be able to sleep tonight!

This is both better written and less off-putting than at least 98% of fanfiction.net's content.

i laughed, i cried, i woke up screaming

One really does have to wonder at what kind of sick mind could write such a thing.

I both want to share that with people and warn them away from it.

Ben, as a newcomer to The Drum community, I was just devastated to hear that you are leaving the ABC Drum. They are mad to let you go. I have only just discovered you and have relied on your weekly wrap to keep me sane. You are the leaven that leavens the bread, the funniest thing out. Perhaps you just came too close to the truth in your inimitable way. We won't allow you to say goodbye so will watch out for you and hope you will join in the ABC blogs - perhaps as the Cheshire Cat from Alice in Wonderland, whose grin is the last thing to disappear each time he vanishes. Thanks for your amazing contributions. It will leave a lasting impression on us all.