If You're Not Part of the Problem

What is the correct attitude to take in response to those shocking images on Four Corners which we all totally watched and didn’t shut our eyes and hum loudly during? As always, the issue is complicated and yet simple, as long as one pays attention to the subtle cues being given to us by our social, political and ethical superiors in the media and entertainment industries.

First of all, is it acceptable that we allow our cattle to be sent overseas to have their eyes gouged out and their tails broken and shins kicked and things? It certainly is NOT! These cows are AUSTRALIAN. They are OUR COWS. What sort of Australians would we be if we let Australian cows be tortured? It would be, and I realise this is a label not be thrown about lightly, “un-Australian”! Completely and utterly un-Australian. Not Australian at all. If anything, it would be, like, Mexican or Chinese maybe. Is that the country we want our cows to grow up in? Or in the case of veal, not grow up in?

No, we cannot let our cows be treated in this manner. Let the Indonesians source their beef from other, less egalitarian and matey places. Let them torture foreign cows, cows without a grounding in Judeo-Christian ethics.

On the other hand, what right do we have to complain about bad slaughtering practices given what goes on in our OWN abattoirs? No right at all, obviously. We happily butcher countless sentient beings for our own pleasure and then have the audacity to complain when confronted with the inevitable consequences of our desire to treat our fellow intelligent beings as commodities? What vicious scum we are.

So, one story, two sides: on the one hand, we have the moral high ground here, but on the other hand, we are inherently evil. It’s this duality that makes our lives so exciting, of course, but let’s delve deeper. What is the real issue here, as laid out by intelligent letter writers and tweets everywhere?

That’s right: asylum seekers. As has been pointed out by good-hearted people and also journalists, it is fairly hypocritical of anyone to squeal about cattle being sent overseas to be mistreated when they remain silent about asylum seekers being shipped off to Malaysia where everyone gets caned and the toilets are disgusting. How can we possibly think our consciences are clear just because we ban live exports, while we are also willing to treat desperate human beings as “cattle”, apart from the killing and eating bit, although who knows with the way those Malaysians play up, am I right?

So we have two very pressing issues here, both involving sending things to other countries. The first issue: how can we make sure that decent Australian cows are not mistreated while still enjoying the rich, juicy flavour of a good burger without feeling guilty or getting paint thrown on us? The second: how can we make sure that grubby queue-jumpers are not denied their human rights to the extent that Sarah Hanson-Young notices and starts nagging us?

Well, there are a number of possible solutions, and no doubt Julia Gillard will be sitting down with industry and working through the issues in accordance with the government’s official Sitting Down and Working Through Things policy. This is because it is important to get the balance right, and as Agriculture Minister Joe “Rawhide” Ludwig has explained, the priority is to ensure supply chain assurances in order to safeguard animal welfare outcomes while maximising the potential for optimal paradigmatic visualisations leading to the enumeration of multiple recursive principles of axiomatic fulfilment which should guarantee the creation of multiple inherent redundancies in the cause of obviating the necessity of further peak discussions regarding the consideration of dis-endorsing our diplomatic self-actualisation. So that’s what we’ve got to get right before anything else.

The first possible solution is to end both live exports, and sending asylum seekers to Malaysia. This is a stupid solution not worthy of a moment’s consideration for reasons that are blindingly obvious to anyone but the most feeble-brained of imbeciles. Which I assume you are not, so I won’t insult you by explaining.

The second possible solution is to INCREASE both live exports and sending asylum seekers to Malaysia. I’m not quite sure exactly how this will solve the problem, but I suppose eventually we won’t have any cows or refugees left, which will give us a lot more space to stretch out in and grow a few vegetables which are healthier than both beef AND Afghans.

The third possible solution is to pre-torture our cows here at home, so the Indonesians won’t have to. We could get the asylum seekers to do it for you. Two birds, one stone.

Fourth, we could feed the cows TO the asylum seekers. Or the asylum seekers to the cows. Though this runs the risk of promulgating the dreaded “Mad Refugee Disease”. Possibly we could just put them all in a pen and let them fight it out.

But the fifth solution is the one that solves the problem elegantly and permanently while playing to the Gillard government’s strength: SYNTHESIS.

What we do is, we keep the cows here, and treat them well, with high-quality fodder, hygienic and spacious living quarters, and regular full-body massages. This way the cows will be happy and their meat will be especially tender. But we don’t actually eat them, instead we live with them as equals. Or possibly not exactly equals. We’d probably live with them like they’re our children, or really fat people from a third-world country. About that status.

Then, instead of sending COWS to Indonesia, we send the asylum seekers there, and film THEM being abused in abattoirs. Then we win a Logie for it. Then we bring them back here, and milk them. Then we make cheese. Which we feed to the cows, who by now will have evolved into highly intelligent beings able to address the crippling skills shortage in the mining industry. Then we send the asylum seekers back to Indonesia, and have a bit of a giggle. Then we take 4000 genuine refugees from Malaysia, and assign each one a number, which will correspond to the cow who will be their new master. Having dressed each refugee in a nice clean morning suit, we text the cows and ask them to drop round for drinks and…

OK, this is getting a little complex I admit. Perhaps we should all just calm down a bit and remember that, no matter what happens to the cows, or the asylum seekers, the important thing to remember is that we really, really CARE. And in the end, isn’t that the most important thing? They can punch our cows, and they can flout our immigration laws, but they can never take away our feeling of moral superiority.

And I guess feeling superior to the rest of the world is the most satisfying solution of all. 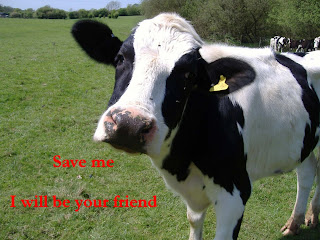 Far and away the most sensible comment on the Malaysia solution I've read.

Ben I'm going to marry you when I grow up!

Goodness, Kath, really? When will that be?

Glad I was not the only one to be angered over this when the Four Corners story went to air.