How To Carbon Tax, Or Else Not

Hello, how are you? I am here to talk to you about carbon taxes and other things of that sort which are good for saving the environment or possibly destroying the economy if that's what you're into.

What is a carbon tax? It is a tax on carbon, if that's not too complicated.

What is carbon? According to Wikipedia it is the chemical element with the symbol C and atomic number 6. Scary? Perhaps or not. Not much is known about carbon except that it is necessary for life and also kills people. So what to do? We must put a price on it.

But just because we accept that we are all going to die doesn't mean that we are agreed on the best way to go about it. Should we solve the problem by ignoring it? That usually works. But will it in this case? Probably. So let's do that. But no! We can't! Because of economics.

Economics demands we take action! ACTION! But should this action be direct or indirect? There are pros and cons to say the least.

DIRECT ACTION: This means action will be direct, which means Tony Abbott will give lots of money to lots of people who will promise to be good. It is like prostitution, except instead of sex people will sequester carbon. If you ask a prostitute to sequester carbon she will but it costs extra. But it won't cost extra to get business to sequester carbon it will just cost a lot. The advantage of direct action is that it will cost a lot. The disadvantage is that it will be so direct it might hurt, like being kicked in the neck. OUCH!

INDIRECT ACTION: This means action will be indirect, or "passive-aggressive". Under the government's plan, carbon will be persuaded to commit suicide through a system of rumour and innuendo. Is this the way to go? Certainly it will be cheaper, but also it will be more expensive, so what is the man in the street to think? We asked him: 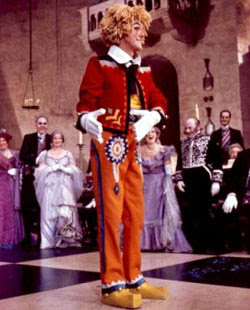 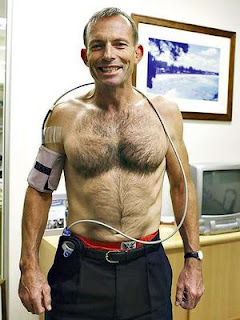 So in the end it comes down to whether we want our planet in the hands of a psychotic woodland monster, or a bionic man. It's a hard choice but one we must make unless we don't, in which case our children will have a horrible life unless everything is wrong in which case they won't, although they still might, since they may just be bad people. You should have raised them better.

But let's not quibble. One thing we can all agree on is that climate change, for better or for worse, is definitely possible if we accept the word of someone or other. If we don't then the opposite might be true though this seems unlikely doesn't it? No, not really.

THIS IS FINISHED
Posted by Ben Pobjie at 11:46 PM

Well, that's cleared that up...

To borrow a certain cardboard sketch from some famous charlies...

Abbot-nok: But we can take direct action to stop it!

Abbot-nok: Well, all we need to do is to take action directly, and we'll have fixed Carbon!

Gillardgoon: How do you intend taking action "directly?"

Abbot-nok: Then I have another idea.

here is a novel idea... how about do neither and instead legislate the following:

2) outlaw two stroke gadgets such as a leave blowers

3) all new buildings need double glassed windows, floor insulation, roof insulation and wall insulation adhering to German standards, introduce an energy pass for properties as they have in Germany

I'll guarantee this will do more in reducing emissions than just slapping another tax down what will only lead to more waste by the government.