There has been a lot of debate in the media lately about whether a family with a combined income of $150,000 is "rich", triggered by the federal government's provocative failure to say they were at any point in time ever.

So I'm here to answer the question: Are they rich?

Well, it all depends on your definition of "rich", of course.

They are certainly not "rich" in the sense of "Oh I just can't decide which yacht to sail down to the shops to buy my new diamond-encrusted microwave".

And they're not rich in the sense of "My life is a lot more relaxed since I became CEO of Microsoft".

And they're not rich in the sense of "Every day I spend $20,000 on high-class prostitutes who are willing to call me 'Atreyu'".

And they're not rich in the sense of "This chocolate cake is so rich and delicious".

They are rich in the sense of "being richer than almost everyone else on Earth".

And they are rich in the sense of "Seriously? You have $150,000 a year and you want welfare? That's a bit frigging rich".

And they are rich in the sense of "Stop bitching about how the government isn't going to give you as much free money".

And they are rich in the sense of "Seriously, dude, just shut up".

So we can see how there are arguments on both sides. On one hand, you can easily say that people who earn that much, while not "rich", obviously have enough money to get by without relying on government handouts, and are far enough at the upper end of the income scale that suggesting cutting their welfare is an "attack on average Australians" is so inaccurate as to be demented.

On the other hand, it's also true that people are incredibly whiny, and that it's an outrageous act of Bolshevik class warfare to force people to pay more tax just because they earn more money, and people are doing it tough and can't do without their welfare payments, and the government's Budget will act as a disincentive for people to get ahead because who on earth would want to have more money if they knew they were going to have a little bit less than they would have had if they had a bit more than that?

So why DOES the government want to punish people for hard work? Why DO they want to criminalise success? Why ARE they going to inflict severe spinal injuries on everyone with two cars?

It is probably because the Prime Minister does not know what it's like to have children. 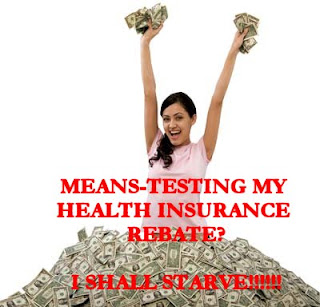 You have voiced my thoughts exactly.

" the Prime Minister does not know what it's like to have children."

Seriously? The public whines when they aren't given attention, gets grumpy if we can't have what we want RIGHT NOW, and throws a tantrum when the lolly they sneaked gets taken away.

That, and the public also regularly stands with arms crossed, looks the PM in the eye, and shouts "I HATE YOU! YOU'RE RUINING MY LIFE!"

I'd say she knows more about parenting ungrateful spoiled children than anyone else.

...wasn't my idea said the child to the parent.

So true, government money should really be for people that need the money to feed, clothe, etc themselves. If you can do that already it's a bit greedy.

Also check out my blog, I'd love to be added to your blog list!

So agree. We fell into that bracket and I would feel ridiculous complaining about missing out on middle class welfare. Although I will happily slam the tax dodging bastards who hide their income, claim every benefit in the book and slam people on the dole. Gross hypocrisy.
Michelle