Hitler: the lighter side

Most of us are aware that Hitler is a pretty common go-to guy for politicians, writers and public figures looking to score debating points against their enemies. You know how it goes: "What M X is proposing is disturbingly similar to the policies enacted in 1930s Germany"; "The honourable member brings to mind frightening echoes of the excesses of the Nazi Party"; "The government's policies carry more than a whiff of the Third Reich"; "You're a fucking Nazi, pal" and so forth. Many a reputation has been effectively smeared in this manner, not least that of Mr X.

However, all of these smears have, until now, had one notable thing in common: in all cases, the Nazi parallels were brought up to show the person, party or policy being compared in a bad light. That is, the rule has hitherto been, if you say that something is a lot like what Hitler would do, you are saying it is not a good thing.

NOT ANY MORE, BABY!

West Australian state MP Peter Abetz has changed the game for everyone with a breathtakingly original move: citing the Nazis as a positive example to demonstrate the soundness of his proposal.

That's right: Abetz, pushing the WA Liberal government's legislation that would grant police powers to search people in public without needing to show reasonable cause, chose to illustrate the good sense and practicality of the policy by pointing out how well it worked for Hitler.

"When it comes to the crunch, people prefer to be safe than to have freedom," said the good member, cannily putting his finger on just why the Liberals are known far and wide as "The Cuddly Party".

Bravo, The Hon. Mr Abetz. We thought we had seen every political trick, every cunning tactic, every sly manoeuvre, every cheap rhetorical trick, every piece of clever spin under the sun. We had, I confess, yet to consider the possibility that a politician who to all outward appearances is a fully-functioning adult human being might at some point try to put into play that rarest of political gambits, the old "A vote for me is a vote for a police force modelled on the SS" ploy. Kudos to you, sir! 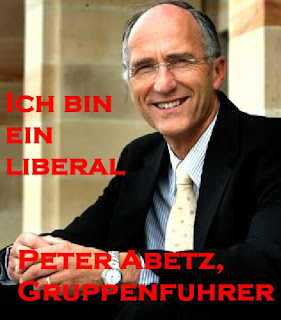 as a Sandgroper, and a Jew, I found myself with an uncontrolablr urge to locate and destroy the 'honourable' member for sother river. I thought better of this after taking my medication and just forwarded the ABC(.net.au/news) article to Haaretz, the ultra right wing daily newspaper in Israel--Let Mossad do the seek and destroy!

I don't think I'm meant to be West Australian. It's all been a terrible mistake