I catch the fire and sound a warning to my fellow Victorians about the dangers of womb-liberation and god-defying - with thanks to modern-day prophet and public-minded ubermensch Pastor Danny Nalliah, and his Catch The Fire Ministries, AKA Australia's Conscience - in my latest New Matilda article. 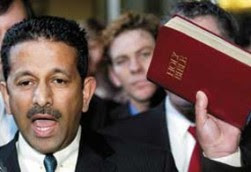 However, it is true that that article was the second I wrote on the subject. The first didn't make it to publication, but I am going to reproduce it here, just in case anyone might be interested in reading it for purposes of comparison and enlightenment and saying, "Yeah, I can see why".

So this is another piece on Nalliah, EXCLUSIVELY FOR BLOG READERS, below:

I know I haven’t been in touch for a while, and I do apologise for taking up your valuable time; I know you must be terribly busy. But frankly God – and I hope you don’t mind my using your first name, I like to stay informal – some of us have recently become a little worried about some of the company you’ve been keeping. We’re afraid you’ve fallen in with a bad crowd. And we’d hate to see you go off the rails because of your friends’ bad influence.

Take Pastor Danny Nalliah. Please (That was a joke, God – you may not be au fait with the modern edgy comedy). I don’t know if you’ve heard, but he’s been going around spreading this rumour that you were responsible for the Victorian bushfires of the past week. According to the good pastor, you set the state alight to punish Victorians for legalising abortion last year. He knows this, because in October last year he had a dream, in which, according to his press release, “I saw fire everywhere with flames burning very high and uncontrollably”. He interpreted this as meaning that you had removed your protection “from the nation of Australia, in particular Victoria, for approving the slaughter of innocent children in the womb”.

Now, I confess that last weekend when I looked out my front door and saw the smoke rising, I did for a fleeting moment think, “Oops, I hope this isn’t because of that womb that I approved the slaughter of innocent children in”. It’s a good thing I read the papers and found out about the extreme heat and high winds and abundance of fuel, or I would have been beating myself up all week over it.

But what I’m getting at, God, is that this “pastor” seems to be trash-talking you. Are you really happy with being labelled an arsonist?

I realise that there have been incidents in the past. I realise that you do have, shall we say, a certain amount of “form” in this area. But hey, we all did stupid things in our youth. We all have our crazy stories to tell, about drunken parties and childish vandalism and killing firstborn sons. But past is past. Bygones, etc. You wouldn’t want to be judged on the Old Testament any more than, to take a random example, Peter Costello would want to be judged on any hypothetical past messages he might have theoretically sent to certain non-specific religious maniacs, back before he became a respected journalist. Youthful indiscretions etc.

I doubt you’d appreciate Danny Nalliah coming along and besmirching your reputation, after all the work you’ve put in on the public relations front. I don’t mind telling you, God, we’re all kind of annoyed down here. To be honest, the fires have been a bit of a bugger for us. I know you’d hate to think anyone thought you might be responsible. And I know you’d hate people to think you were wasting your time setting uterus-induced fires when you could be using your time more constructively.

And that’s why I’m writing to you, God, because I don’t think you should be associating with people like this. If nothing else, the name “Catch The Fire Ministries” is a bad look. Can you imagine being a member? Walking around saying, “Hey, have you caught the fire?” An awkward situation for any thinking person – so I suppose it’s not really a problem for them.

But there’s more. Danny Nalliah is saying you’re a firebug, but he’s also saying you’re an incompetent firebug. According to him, abortion was legalised on October 10, 2008, but you didn’t get around to doing anything about it until February 7, 2009. So according to Pastor Danny Nalliah, so-called Christian clergyman, either you are so slow on the uptake that it takes you four months to catch up with the latest news, or you’re incapable of starting a fire until the hottest day of the year. He’s dissing your omnipotence, man! Are you going to stand there and take that?

If you need more convincing, consider this: Nalliah’s church has apparently been assisting in bushfire relief, sending out trucks to distribute clothes and food and such. That’s right, God: he thinks the bushfires are your divine will, and he’s trying to thwart you. Outrageous? Yes. Sacrilegious? Yes. Downright rude? Damn straight.

So, let’s go through the litany. The man spreads vicious rumours about you. He calls you an arsonist. He calls you incompetent. He defies your will. I’m sorry God, it’s time to cut him loose. I know he’s a Pastor, I know he’s one of your flock, but there is an old saying I remember from my Baptist youth group: “Anyone who would call your omnipotence and benevolence into question in libellous press releases isn’t really your friend”.

Time to bear that in mind. You have to sever all ties. Don’t go to Nalliah’s services, don’t mix with him socially, stop replying to his emails. It might be painful, but a clean break is the only way when you get mixed up with such disreputable types.

Please do it, and do it now. You missed your chance with Steve Fielding, don’t miss your chance with Danny Nalliah. Because it’s a slippery slope. Today it’s Nalliah, tomorrow you could be getting mixed up with Miranda Devine, Australia’s classiest right-wing simpleton. Imagine that. If you think it’s bad getting blamed for setting fires, imagine how it’ll be when you’re getting blamed for hanging Bob Brown from a lamp post. Embarrassing, yeah? But that’s how it goes: once you start hanging with dodgy characters, you’re on a downward spiral, and if you don’t nip it in the bud, it’ll be but a short step to the lunatic fringe and Andrew Bolt quoting scripture to prove that Antarctica is getting colder.

I’m only saying this for your own good, God. I’ve seen so much potential ruined when good folks make bad choices. I’d hate to see that happen to you. And to be blunt, you’re not a kid anymore. You’re old enough to know better – you’re almost as old as the humorous device of the fake open letter. So it’s time to take some responsibility. Send out your own press release. Let the headlines tomorrow say that Danny Nalliah’s been slapped down by the boss. Send an unequivocal message.

Or failing that, a well-directed lightning bolt should do the trick.

Ben Pobjie
Posted by Ben Pobjie at 8:51 AM

All a matter of taste, innit?