Marco Week. It is one of the world's foremost religious holidays, a time when people of culinary faith everywhere join together to worship and adore Marco Pierre White, one of the food industry's foremost psychopaths. This great enigma of the kitchen, who year by year grows more mysterious and less able to say with any certainty where or who he is, inspires powerful emotions in the breasts of aspiring chefs: fear, love, fear, nervousness, inspiration, anger, fear, shyness, hunger, fear, and terror.

Tonight is an elimination: Andrea, John and Jacqui cook off under Marco's watchful yet slightly confused eye to stay in the competition. But not only will they have to cook, they will have to butcher the saddle of lamb themselves as well, a challenge combining the two essential elements of Marco's own career: gourmet cooking and dismembering of corpses.

Early on Andrea runs into a problem: she has confused the lamb with her own thumb and cut deeply into the latter, a development so traumatic she suffers a soft-focus flashback. But ever the trooper, she carries on, reasoning that the lightheadedness that comes from blood loss can only help her cook in the true spirit of Marco.

Apparently it's a night for flashbacks: Jacqui now has one, remembering the gorgeous kids that she so eagerly abandoned to get on the show. It's terror of seeing them again that drives her tonight.

John is rushing. We know this because Marco is staring at him and saying, "John...you're rushing". He reminds John of what happened to the tortoise and the hare, a pretty bad analogy given that the hare's problem was its failure to rush. Nevertheless John says he wants to be a tortoise because if he doesn't Marco will definitely punch him, so he slows down.

Marco wanders over to tell Andrea not to rush either. It's quite difficult for the contestants, what with Marco constantly telling them not to rush and Gary constantly yelling about how little time there is left.

"I'm here to observe you, not to help you," Marco rumbles to Andrea in the manner of a man on the set of a snuff film. Andrea can't read Marco's stony, mad face: she thinks lack of expression is a good sign, but actually it's a sign that Marco has had a stroke.

Marco is taking off his glasses and putting them back on repeatedly, trying to remember what they are and why they're on his face.

"Do I smell something burning?" Marco asks, fearful that his time has come at last. But Marco is like Rasputin: he cannot be killed by conventional means, and he cures haemophilia.

Jacqui is taking her caramelised bones out of the oven, but it doesn't make her any more interesting. "Amazing what can be achieved with a bit of care and thought and love, isn't it?" says Marco, who now believes that he is actually a priest presiding over a wedding. Jacqui decides that Marco's cryptic pronouncements mean she should ignore the recipe, a move which pretty much always works on Masterchef.

"I know I have to dig deep inside to create something as great as Marco," says John, his experiments in gene splicing proving frustrating. He flashes back to his life as a flight attendant, praying Masterchef will mean an end to his days of helping people.

Meanwhile Andrea's noisettes are bursting open due to rough handling, just like Marco's sous chef. Will this cost her? At least she's not as dumb as Jacqui, who forgot to tie up her noisettes with string, like the worst kind of moron. One of Jacqui's noisettes bursts open too. The carnage is horrific. It's like Saving Private Ryan. Noisettes are exploding everywhere, strong men are weeping, children scream for their mothers. It's a sobering reminder of the most important element in cooking: string.

The last thing John wants is crunchy artichokes, which I assume is some kind of underground fetish club slang. Marco is quizzing Jacqui about her artichokes. Jacqui took it for granted that they'd be cooked. Marco finds this "interesting", which is almost certainly his way of saying "I am going to gut you like a fish". Although it's equally plausible that he only even talks to the contestants so he can lean on their benches and have a rest, since any movement at all seems to take enormous effort.

John needs to push through and get these on a plate, and nobody can seriously argue that this is a valid goal at the moment. Andrea is feeling the pressure and cutting it fine with her mushrooms, unlike Marco, who took all his mushrooms hours ago.

"You haven't got a second to waste," Marco lies. With five minutes to go, the contestants are for the sixtieth time urged to "push", as if that means anything whatsoever.

Reynold is concerned that Andrea isn't going to get her mushrooms out in time, but given Reynold is incapable of making any dish that doesn't include ice cream and salted caramel, don't know why anyone would ever listen to him.

John bursts into tears as he sees his partner's face floating before him and realises that ghosts are real.

Jacqui now realises her failure to trim her noisettes and that she has shamed her family. Emotions are running high for the three amateurs, who are rightly disgusted with themselves.

Gary has no idea how they're going to go. He doesn't really even know who they are. He has not been paying attention to anything that's been happening since the auditions.

John plates up his noisettes first. They look good. Marco smiles at him erotically. John tells them how he left a job that he loves to pursue his dream of getting a job that he doesn't love. Marco thinks John doesn't like following recipes. Marco's fingers are crossed. Marco will consult the entrails of a boar and get back to John.

John has done a very good job. The judges can't stop talking about how white the artichokes are. It's kind of creepy. Marco thinks John has shown off who he is - a small round piece of meat in a brown sauce.

Next is Jacqui, with her fat-lined noisettes, one of which has burst. "Pressure's an amazing thing, isn't it?" Marco says, inviting her to his bed with his eyes. Jacqui loves to cook and wants to do more, which should be pretty easy because it's a free country and nobody is going to stop her from cooking if she wants to.

Matt thinks Jacqui's done a really good job. "Lamb loves garlic like a shark loves blood," he cries, which is a fairly sociopathic thing to say. The judges agree: she's done lots and lots of things wrong, but given their incredibly low expectations, she's done OK.

Andrea's turn. "It was amazing watching you today," says Marco, mentally carving her into thin strips. He pokes his noisette with his fingers, as close to foreplay as he ever gets.

Andrea's lamb is undercooked. Except Gary's bit. Gary is the favourite. Marco says he's "nitpicking" by noting that Andrea, an entrant in a cooking competition, has cooked badly. I guess he would rather we look at the big picture, like Andrea's posture and dress sense.

John's dish was the best. Andrea's was the worst. Which was saying something, because Jacqui's sucked. Andrea thanks the judges for an amazing experience, in the voice of someone who wishes she was at this moment walking into the sea. Marco tells Andrea again how much he loves watching her cook, and it is as always incredibly disturbing. There is a definite implication that Marco is going to follow Andrea home.

An epilogue informs us that Andrea is "exploring her food opportunities", so I guess she's basically given up. It says she hopes to stage pop-up dining events for charity, but that sounds a lot like something someone who has no plans would make up when a producer rang them up. 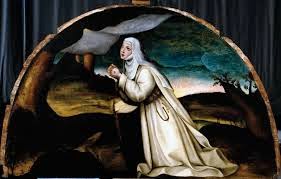 Andrea learns her fate
Posted by Ben Pobjie at 3:51 AM