BREAKING: Joe Hockey admits wife has been giving interview answers without his knowledge

Treasurer Joe Hockey today stunned the Press Gallery by admitting that for some time, his wife has been providing his answers during interviews and press conferences without his knowledge.

Mr Hockey, who had come under fierce criticism for recent statements - including his speculation that the wives of government ministers Matthias Cormann and Josh Frydenberg may have "double-dipped" on paid parental leave schemes without informing their husbands - became emotional as he revealed that for the majority of the past year, his own wife had been living in his mouth and supplying all the words he spoke in public, unbeknownst to him.

"I can only apologise on her behalf," Mr Hockey sighed in a doorstop interview. "She hid her activities from me, and the fact is wives do sometimes keep things from their husbands. It's not uncommon for a man to be unaware of his wife's financial decisions or secret life inside her husband's mouth speaking on his behalf, and I'm afraid that's what's happened here."

It would appear that Mrs Hockey had engaged a contractor clandestinely to build a small alcove towards the back right corner of the Treasurer's mouth, from where she could manipulate his tongue and cause the emission of her own chosen words at any time she chose.

It's believed that Mrs Hockey's actions are responsible for many of her husband's most controversial statements of late, including: the assertion that accessing an employer's PPL scheme and the government's scheme at the same time was "fraud"; the claim that he had never said that it was fraud; and his agreement to appear on the Today Show with Karl Stefanovic.

When asked whether Mrs Hockey was also to blame for past gaffes such as references to "leaners and lifters" or his claim that poor people don't drive cars, Mr Hockey said he would have to check his records, but noted that "certainly my wife seems to have a penchant for saying incredibly stupid things that an experienced and professional politician certainly wouldn't say". He implied she may also have rigged some kind of apparatus that caused him to smoke cigars and dance in his office at the time of last year's Budget, but replied "No comment" when asked whether that entire Budget was delivered by Mrs Hockey.

At time of writing, comment was being sought from Social Services Minister Scott Morrison as to whether Mrs Hockey had gained access to his mouth when he declared that accessing two parental leave schemes was a "rort" but that people who did it were not "rorters"; and from Prime Minister Abbott regarding his entire life. 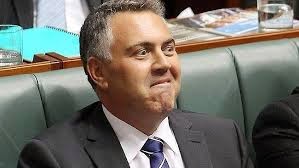