We begin with a preview of tonight's episode, in which Laurina will be extremely disappointed with the way her life has gone and not before time. We then move on to the now-traditional moment where Amber says she really really wants to go on a date. Osher enters and says there'll be no group date. Amber takes the opportunity to catch some flies with her mouth, and then moves on to bitching about the other women. How does Amber cope with not living in a house full of women, with nobody to constantly complain about?

The others think the new girls will be picked to go on dates. "I haven't been on a single date and all my friends think I won't, that's great," says Amber in a particularly nasty tone of voice; which is to say, her normal tone of voice. If only she knew that she's mistaken: she has no friends.

Sam doesn't know what Blake has planned, so it'll come as a surprise when she finds out he has nothing planned - all the planning was done by the show's producers. What THEY have planned is a ride in a helicopter, which I'm pretty sure has been done before but I guess when you have access to a helicopter you need to get as much use as possible out of it.

The helicopter lands at the Sydney Polo Club. "I'm definitely a country girl," says Sam, taking on the challenge of self-identification with gusto. Apparently being from the country means you're used to hanging around in clubs for incredibly rich city people.

Blake and Sam sit on the grass and eat strawberries and Sam talks about how vulnerable and scared she is, because that's her sole personality trait. Blake is so happy she felt ready to open up to him. "Our relationship is really progressing," he says enthusiastically, excited about another woman he gets to feel up before getting rid of her once he's bored.

Laurina thinks Sam may be too young for Blake "if he's looking for a woman". It's pretty amazing the way Laurina has identified fatal flaws in every woman in the house except herself. Her perceptiveness is stunning.

"I wanna know how far we can go," says Blake, hastily adding "in our relationship" when he remembers he's not supposed to admit he's just there to get laid. Apparently it's getting easier for Blake to imagine a future with Sam. She's, like, third or fourth now on his list of women he can imagine a future with. He's doing so much future-imagining he's like the Nostradamus of sleazy dickwits.

"It's an awesome feeling to know that he likes me," says Sam, her low self-esteem screaming with pleasure at all the attention. Blake wants Sam to know that she's definitely "in this"; as a smooth operator, Blake knows that what every woman most wants to hear is that she's got some kind of chance of being picked ahead of all the other women he likes.

Then they kiss and it's a magical moment and time seems to stand still a lot like when Blake kissed all those other chicks.

Back at the mansion the women are talking total nonsense in accordance with their contracts.

Now time for Blake's date with Lauren, the first "new girl" he's taken on a date. He just wants to know if there's chemistry between them, so he can decide whether all that crap he was saying to Sam earlier is worth going on with, or if he should say it to Lauren instead. Blake has taken Lauren out for Italian, which is a pretty original idea I reckon. They have spaghetti, as part of Blake's plan to humiliate Lauren.

Blake is weirded out by the fact Lauren has never been in a long-term relationship. People who've never been in long-term relationships sicken him. He, personally, has been in hundreds, most of them simultaneously. Meanwhile Lauren senses a real genuineness about Blake, which is fair enough: The Bachelor is one of the few places you can find a man who is totally honest about the fact he's cheating on you with multiple partners.

"Thank you for coming along on this Italian adventure," says Blake, vastly exaggerating the properties of a bowl of spaghetti, as he gives Lauren a rose, and she, brainwashed by an artificial romantic ideal, accepts it.

Laurina doesn't know what Blake has planned, but has dressed up extremely fancy because a producer with a sense of humour told her to. Laurina thinks it would be pretty good if Blake had a private jet lined up, because she's mistaken being a Bachelor contestant with being Marilyn Monroe.

Blake wants to know if Laurina can "throw caution to the wind and enjoy a more simplistic date", or in other words, he hates Laurina and wants her to be unhappy. Which she is. "That's unacceptable," says Laurina, in reference to the fact that Blake has taken her bowling. "Hashtag clown shoes with a cocktail dress. Hashtag awkward," she fumes, having learnt to say "hashtag" out loud from her favourite book, Making Everyone On Earth Hate You For Dummies.

Laurina starts to enjoy the bowling, having realised that Blake doesn't put out for pouters. The pair strike a wager: if Laurina wins bowling, Blake will give her a romantic dinner; if Blake wins, he gets to throw her into a landfill. Laurina wins, which means she's about to be disappointed again.

Laurina says she's hoping the place Blake takes her will be cocktail attire-appropriate. Blake chuckles darkly, much like a homicidal maniac might. Because he is taking her to a pie shop. It's Harry's Cafe de Wheels, one of Sydney's most iconic locations. Blake claims he's been waiting to visit for years, which is a bit weird because it's a very easy place to go to if you actually want to.

Laurina is not happy she's been taken out for a pie, beginning to suspect that Blake is enjoying her suffering which to be fair he is. She is furious that other women have gotten yachts and planes and fancy dinners, while she gets "a dirty street pie". But it's a funny coincidence, because in high school Laurina was voted Most Likely To Eat And/Or Be Referred To As A Dirty Street Pie.

Blake feels his date has backfired, as he giggles on the inside. "Time to get this date back on track," he says, hopefully meaning he is about to tie Laurina to a railroad. Actually what he's going to do is give Laurina a puppy, as a metaphor for how he feels about her personality.

It's Laurina's own puppy, which means Blake has broken into her house and kidnapped her dog.

Back at the house, Amber is furious that Laurina's dog got a date, and she hasn't, because Amber doesn't really understand how this show works. It seems unlikely that it's the first time a man has chosen a dog over her though, so she can't be that shocked.

"I feel sorry for Amber," smiles Blake's favourite Jess, who always has sympathy for the underprivileged in society.

At the cocktail party, it's the birthday of one of the new girls but I don't know her name. It's the one who's a bit like the netball one I think. It's pretty hard to care, I think you'll agree. Oh her name is Rachel maybe?

It's not important: what's important is that Amber is having a sulk. This isn't news, of course, it's just the continuation of a trend that began in the early 90s. Blake comes in and asks Laurina to go for a walk with him, mainly because so Amber knows he doesn't want to go for a walk with her. Blake wants to clear up some issues regarding their date. Laurina admits she was a pain in the arse, but she's only referring to the date, not to the entire rest of her life. She feels pretty remorseful for judging Blake so harshly before she found out he was a dog-thief.

Blake returns and asks Jess to go for a walk. "Are you kidding me?" says Amber for the eightieth time this series. It becomes clear that Blake's family and Amber's family are participants in a centuries-old feud, and Blake has only entered the show in order to take his revenge.

Finally Blake asks Amber for a chat. He wants to tell Amber exactly how he feels, possibly with the aid of colourful graphs and a recording of hyenas laughing. He needs Amber to understand that although she's yet to have a single date with him, he considers her to be one of the most special crazy vicious skanks that he has ever been told by the executive producer to not send home too early.

Blake begins by talking to Amber for a very long time without saying anything, but eventually gets to the point. "I think you are an incredible woman," he lies, before telling her that there is no connection between them and he never wants to see her again. So weird how the incredible women are always the ones that Blake doesn't like. Blake doesn't want to put her through another rose ceremony: he thinks it wouldn't be fair to her, or to his own desire to not look at her goddamn face anymore.

Back at the mansion, Osher emerges once again from his basement lair. He tells the ladies that Blake has just kicked the rungs out of Amber's love ladder. The women's reactions run the gamut from not giving a shit, to not giving a shit but acting like they do.

The bonus for the remaining women, of course, is that since Blake just took Amber out to the garden and then put her in a car, all her possessions are still in the house to be divvied up. Meanwhile Amber herself is driven off a nearby cliff, and we are promised that tomorrow night Blake will continue preferring Jess to everyone else and Laurina will continue objecting to everything that happens.


Below: Blake and Laurina enjoy a tender moment together 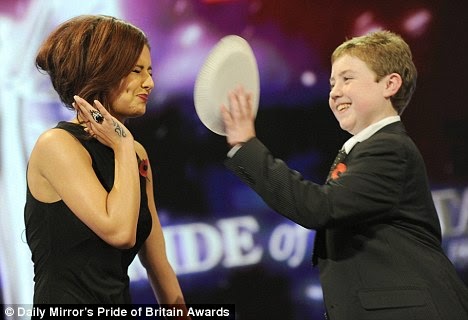 Since I have left Australia forever and I am missing this show, I am very grateful, to you Ben, for keeping me up to date

Also, some strange Facebook algorithm means I never see your updates on my newsfeed. I have you on my close friends list and I follow you (I'm not outside your window or anything). Therefore, why oh why is my newsfeed not being enriched by your postings?