"What are you doing, Ben?" I hear you whine nasally.

LET ME TELL YOU!

For TWO NIGHTS at the Adelaide Fringe this weekend, I'll be hosting Our Little Stories, a collection of masterful comics telling tales of various heights. Friday and Saturday, 10.45pm at Gluttony. That's right! I'm taking it ON THE ROAD. Interstate. Get into it, South Australian people, with all your eccentric half-hour time differencey ways. Tickets here.

THEN...Tuesday, February 26, I'm popping up at PUGGS IN SPACE, at Pugg Mahones, 106 Hardware St, Melbourne. The estimable Anne Edmonds is MCing, and besides me you'll see the legendary Geraldine Hickey, the radiant Adam Knox, and MORE. Kicks off at 8.30pm

And guys it's FREE! Say hello!

And oh my God it KEEPS ON COMING! March 5 I'll be getting distinctly wordy at BAR STANZA, at the Owl and the Pussycat, 34 Swan St, Richmond. I'll be getting back to my spoken-word roots as part of a killer line-up including Sean M. Whelan, Steve Smart, and host divine Anthony WP O' Sullivan! Can you even believe that? Doors open at 7.30pm, it's only $5, how can you lose?

And oh wow, the VERY NEXT NIGHT I am becoming extremely LITERARY and also CONVERSATIONAL, talking to the genius philosopher and author Damon Young about his book Philosophy in the Garden. This is ESSENTIAL for fans of THINKING and READING. It's at Readings Hawthorn - book here!

Oh no, we're not stopping yet you guys. Gonna be throwing some MORE POETRY at you, on April 6. Come down to the Dan O'Connell in Carlton at 2pm for an afternoon of words and raucous guffaws. Poetry at the Dan is a Melbourne institution, and I'll be your featured poet, leading you through the windmills of my mind. Get in there, sons and daughters!

But of course ALL of the above is a mere aperitif, for some VERY serious business - the business of the MELBOURNE INTERNATIONAL COMEDY FESTIVAL. It's a festival full of brilliant people doing brilliant stuff, and I promise you some of that brilliant stuff will be happening in darkest Fitzroy, in the sweet, warm surrounds of Gertrude's Brown Couch, where I shall be reprising my splendid little Fringe show, Let's Put On A Show. FOR SIX NIGHTS ONLY, it's bigger, it's better, it changes EVERY SINGLE NIGHT as I take my cue from what YOU want me to talk about, and we create an award-winning show together! If you missed it at the Fringe, don't miss it again! If you saw it at the Fringe, no two nights are the same, so come see it once more! In fact, why not see it SIX times more? That's right - come along to every show and win a fabulous prize probably! Information and tickets HERE, I would sincerely love to see you all there. Even you, Anonymous. 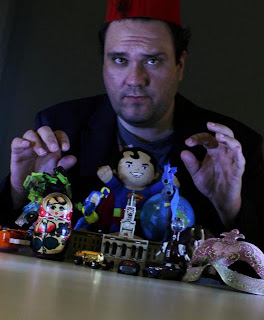