The TROUBLE with Government

Do you know what the TROUBLE is with our so-called GOVERNMENT?

It is that the GOVERNMENT is out of TOUCH.

Everywhere ordinary Australian CITIZENS are gathering around their water COOLERS and having conversations about the ISSUES which affect them PERSONALLY. These are ISSUES like:

But the GOVERNMENT does not UNDERSTAND these issues, because the government has no WATER COOLERS, and they are in CANBERRA, not the inner WEST where real people LIVE.

The government, in fact, thinks that LIES are FINE, because only LIBERALS object to them. So when ORDINARY people say, "hey government stop LYING", the government says, "this must be the work of LIBERALS!" This is a very OUT OF TOUCH thing to say. Also, they government believes the cost of LIVING is fine, and ordinary Australians need to stop WHINING, even though as Australians we have RIGHTS. If the government was IN touch instead of OUT of touch, it would KNOW this.

These are the issues the GOVERNMENT thinks are important:

These are not things the PUBLIC approves of. But as an ORDINARY Australian who works for NEWSPAPERS I am here to tell the PUBLIC that the GOVERNMENT does not care what it approves of because it is out OF touch.

The trouble is that the GOVERNMENT has never had a proper JOB. People in government don't WORK like you and me, they have STUPID jobs like union OFFICIALS and LAWYERS and political OPERATIVES who never see the sweat of their own hands upon their brows.

Here are some jobs that REAL Australians who UNDERSTAND issues have:


Here are some jobs that POLITICIANS have:

- politician
- idiot who will one day be a politician


Is it any WONDER these people are out of TOUCH? The Prime Minister has never spoken to a NORMAL person in her entire LIFE. She has not even spoken to a marriage CELEBRANT because she won't get MARRIED and she has never spoken to an OBSTETRICIAN because she does not have CHILDREN. I have children and I can say that it gives you a PERSPECTIVE on life that people who don't HAVE children and are pathological LIARS do not have. That is WHY I am giving this free ADVICE to the GOVERNMENT based on years of EXPERIENCE as a real Australian with functioning SPERM.

I am sure the FAT cats in Canberra will dismiss this hard-hitting and HONEST article as simply another case of LIBERALS, but all I want is for the government to get in TOUCH with everyday battlers and REALISE just how much we HATE it when politicians LIE to use about how they paid for their SEX workers, and when they ask their ASSISTANTS to shower with the door OPEN. If the government does not stop being out of touch SOON, all our shower doors will be open and we will vote in the LIBERALS because at least they are IN TOUCH WITH US.

Please LISTEN to me, I am a JOURNALIST (see above). 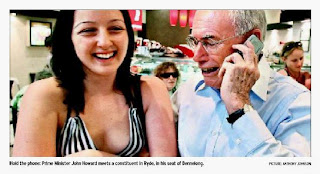 A politician being IN TOUCH with ordinary Australians﻿
Posted by Ben Pobjie at 10:33 AM

Mocking people who struggle to make ends meet is hardly amusing. I heard yesterday that two million Australians can't afford dental care. I am one of them but that is the least of my worries. I can't afford to keep a roof over my head, and of course will never be able to afford a family. I know that people like you love the idea of depriving Westerner's the ability to afford to breed, through carbon taxes and mass immigration, but please don't mock our poverty.

Dear Anonymous, I normally don't work to deprive people the ability to breed but in your case I will make an exception.
Your poverty is irrelevant but your rank stupidity is dangerous.

Ben, stop reading The Drum and watching Bolt. You're starting to assimilate.

I for ONE welcome our NEW capitalising OVERLORDS.

All HAIL to EMPHASIS.

Just read it out LOUD the way its WRITTEN. It SOUNDS great.

Let's see who is the stupid one. Tell me why my poverty, or that of fellow Australians, is irrelevant.

The trouble with irony and satire is that all too many people take it for genuine opinion.

Whilst there are many hints in the text that this is total irony, even some of your readership (a truly dedicated band) have their doubts.

The peculiarity is that many people think that exchanging one bunch of politicians for the other bunch might actually improve the "out of touch" issue.

My serious take is that this is a seriously good government governing well. The opposition is truly desperate to get an election before the people realise that the (would-be) emperor has no clothes.

"My serious take is that this is a seriously good government governing well." Is this irony or satire?
Everyone who does not drink Canberra Kool Aid realises that the ALP and Libs are two cheeks of the same arse.

To Anonymous : if that is so, why is one cheek attacked so fervently, and the other kissed equally fervently by the media, Rupert's in particular?

The media are hemorrhoids which pop up on either cheek, though you will most often find Insiders/Fairfax/Crikey/Drum on the left cheek and Rupe/Gina on the right.

the bottom line is that there is no left or right, simply the elites (including the media) and the rest of us.

Anonymous said: "the elites... and the rest of us"?

I think you've got me in the wrong group, dear.

'us' clearly does not include the majority of people who visit this site. You should feel proud that you consider yourself elite and know what is best for 'us'.

I always thought that haemorrhoids turned up in between the cheeks?

The elites include the media? Wow, won't they be stoked.

The impression is that there is no difference between the two major parties, but that is very wrong. Both try to capture "the middle ground" especially in election mode.

Abbott has never been out of election mode. If he doesn't drop dead soon, I will be surprised. And not very sorry.

you gots to chill Doug. It makes zero difference if Abbott takes over. The same Corporate/UN interests will still be in charge.

You've got that nearly right, Anonymous.

Abbott won't now be able to do anything much, due to the interest groups and lobbies.

The Green numbers in the Senate will ensure that he cannot roll back the carbon price, even if he really wanted to.

But I think he will do some damage, in a mean-spirited, snide 'dog in the manger' fashion.

Your piece on the Budget over at the Drum is not nearly as funny as all the comments taking it for serious commentary.

And these are ABC readers!

What of the ones out there who watch commercial gibberish all the time and read Murdoch press?

I suppose you might as well laugh, it is either that or cry.

I prefer to laugh.

It's going to sound preachy and ignorant, but I truly fail to see how having 'functioning SPERM' and being a parent give you extra special perspective on raising children. We live in a child centric, juvenile-obsessed culture, and are constantly cajoled to 'think of the children!'. I have no problems doing so, I am happy to pay taxes that support public schooling and a myriad of schemes and endeavours that exist solely for the purpose of strengthening our future by taking care of our youth. It's vital. But I loathe the concept that those who are not parents, do not understand the needs of families and children specifically.
However, I applaud your use of EMPHASIS. It's FUNNY.

If you've got the time and means to troll blogs (which requires basic literacy and access to the internet via any number of nifty electronic gadgets) you've got no place crying that you're living "poverty" Anonymous #1. Poverty-stricken folks are usually more focused on trying to stay alive and whatnot. But hey - you keep on healing the world, one anonymous blog comment at a time!