In Case You Hadn't Heard

Yes, The Rue McClanahan Hour is no more. Due to a disagreement with Triple R management - we thought we weren't disgustingly offensive and irretrievably unfunny, and they disagreed - our radio show was canned after two episodes. We apologise, since we do know there were people who were actually enjoying our little stint Make sure you tune in to Triple R from February on in our timeslot, every Monday 7pm Eastern time, as the Lime Champions will be back, and that's a quality show.

I won't go into too much detail as to the details behind the canning, suffice to say there were irreconcilable differences.

BUT the Gather Around Me podcast starring Ben Pobjie and Cam Smith continues, and there is a brand-new one, in which the Triple R "Kerfuffle" (call-back) is discussed. Go to Gather Around Me both for downloads and hilarious bloggettes.

Do not listen if you don't like hearing the word "rape", or you have a soft spot for hypothetical cats.

Should you be craving even more of the squeezings of my brain, check out my first newmatilda article of the year, in which I tackle the important and delicious issue of whaling.

This is a wonderful read. As "scepticcritic" says:

How can you consider yourself any sort of authentic political satirist when you group ‘black people’ in a separate category from ‘humans"? If you can’t even respect the diversities within your own species I doubt you can do much for the whales.

And as you read the article, maybe you'll ponder that question. WHY?

Furthermore, there's my latest review of weekly doings for the ABC, in which are discussed koalas, farmers, starvation, sailing, Indians, earthquakes and zany Christians.

To get the man in the street's typical reaction to this piece, why not ask "david hicks":

There is a lot that is hugely distasteful about this article

You're a fine one to talk, David. Glass houses, my friend, glass houses.

Or consider the opinion of "Crepitus":

I think Miranda Devine sums up Ben Probjie when she calls him "puerile".(Click on Ben's CV)

Judging from his article, I would add "unfunny and irrelevant" but then I have never heard of Ben till now. He has some work to do if he wants to become relevant and be taken seriously as a comedian or satirist.

To scoff at the Haitian catastrophe is heartless. He had nothing worth while to say about the whaling issue on which he is biased anyway. Does he really want us to go to war with Japan over blubber? Sounds a bit like the War of Jenkins Ears.

OK, firstly, I can't really match wits with those who would agree with Miranda Devine. Intellectualism is not my god.

Secondly, what the sulphur-crested fuck is with people who don't like my articles being unable to spell my name. My name which is ON THE GODDAMN PAGE THEY ARE READING AT THE TIME THEY ARE COMMENTING. I mean, this isn't someone hearing my name and being unable to determine the correct spelling. This is someone who is incapable of directly copying down six letters in a row.

And why do people put an R in my name? I've never understood that? Do they assume I must actually have the terribly common everyday name "Probjie" that most people know and love?

Anyway, much as I have never belittled rape victims, Muslims or the mentally ill on the radio, I have never scoffed at the Haitian earthquake on the ABC website. Read closely and you'll notice this fact.

In fact, you don't even have to read that closely. Just don't be a cretin.

That aside though, I am pretty irrelevant and unfunny. Luckily I have a weekly appointment wherein I sexually gratify the entire ABC board in a disabled toilet in Box Hill, so my job there's pretty safe.

With newmatilda, it's mainly the high-grade heroin I mail to them that keeps on the site.

In summary: spell my fucking name right, for Christ's sake. It's really starting to piss me off.

And now, on a lighter note: 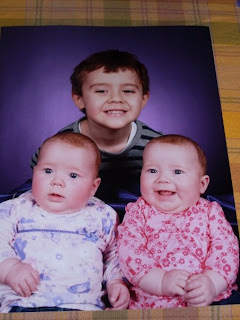 I'm a FATHER, guys. Don't you realise how much the criticism hurts my children?
Posted by Ben Pobjie at 10:52 PM

Are they listening to the show in that photo?

At least your first name's easy, I have to deal with everyone spelling and pronouncing my first and surname wrong.

And when I enter the spotlight, it'll be even worse. You must've gone through your entire schooling etc. with this shit, I figured you'd be used to it by now.

Hehehe, chubby babies and lunatic son... :) And I sympathise with the misspelling. Did I just misspell misspelling? How many esses?? Remember when I was put on the electoral roll as Alice Bo??! Now there's a terrific mispelling of Pobjie!