Audiences, or I am the King In Black

After performing at Dante's as part of "Takin' It To The Streets" at the Overload Poetry Festival Launch, a poet approached me with the most surprising compliment I have ever received.

"You're like a cross between Elvis and Johnny Cash," she exclaimed.

I honestly did not see that coming. I could understand using one or the other in a "cross between" comparison - as long as the other half of the equation was something like "Peewee Herman" or "Ted Bundy". But the two combined? Astounding.

And reassuring, because to be honest I wasn't quite sure how I'd gone over at that gig. Oh yes, there were laughs, but there also...not-laughs, if you get my drift. Audience pockets of quietude that made the insecure part of me suspect they were sitting stony-faced and not amused in the least, and the slightly less insecure part of me suspecting they were just confused - a state, I admit, which is not unnatural for anyone listening to my work, especially for the first time. There could, of course, be a horrid mixture of the two - confusion and non-amusedness both stemming from a deep sense of disgust. In any event, it makes one a little uneasy. The laughs I did get salved the unease, obviously, but the feeling I was alienating half the audience persisted.

This is where a comedian has it hard compared to a dramatic performer or "serious" poet. Because when you're not supposed to get an audible reaction, you can convince yourself that they're loving it. The more silent they are, the more engrossed they are, the line will run. But when you're doing comedy, the judgment is instant and brutal. Either they will laugh or they won't, and if they're not laughing, there is no way to kid yourself that you're winning them over. Instant feedback. Instant euphoria, or instant devastation. It's the great attraction and the great horror of comedy at once.

Which got me thinking, what kind of audience do I really want? Comedic spoken word of my type is tricky - the great appeal of the poetry scene is that audiences are mostly up for anything and pretty welcoming of weirdness, but that doesn't mean they're going to like everything, or necessarily get on board with strangeness, even if they're terribly polite about it.

And the trouble with a real poetry audience such as I had the other night is that they really are expecting poetry. They're not expecting bizarre rambling monologues full of rape jokes and 1980s sitcom non sequiturs. They may well say, "what the hell? This isn't poetry", and they'd probably be right; most of what I do isn't. But luckily a great number of them usually end up disregarding such questions and simply reacting based on whether it's funny or not. As I said, the appeal of the poetry scene is that you don't feel locked in to formats or structures of performance.

BUT there are definitely many poetry folk who feel that it's not quite...correct to do something that has no purpose beyond entertainment.

Although the funny thing is that if you get a bunch of people along to a poetry gig, it's often the non-poets who have the most preconceived ideas. I've noticed this at slams; if a non-poet is made a judge, they seem to be more likely than a poet to mark someone down for not conforming to a narrow definition of poetry.

So I want an open-minded audience. I don't want an audience who's thinking "poetry or bust". I don't really want an audience who's thinking "stand-up", though - a stand-up audience is usually the most narrow-minded of all. Do a tight five in a stand-up venue and it'll be three minutes before they even start listening to the jokes, so confused will they be that you're doing the observation-conversation-Dave Hughes thing they've been expecting. Not that they can't be won over, but it's an effort to get them to go along with something a bit different from what they usually see.

So what we're looking for is an audience of some intelligence, without preconceived notions, and a willingness to laugh. The last is pretty important - get an viewer without a sense of humour and you get the girl last year who made an official complaint about me after I said that reverse racism was the practice of backing your car over Aborigines.

That was fairly typical though - go near any even remotely touchy subject and you can guarantee there will be someone uniquely sensitive to the topic in the audience. When I first did my quadriplegia joke, there was a guy in a wheelchair. At the Overload launch I did a pretty new piece that featured the line "Hating Dutch people, that's human nature". Naturally afterwards I was told there were about six Dutch people in the audience. At last night's gig I did a piece with a line about killing Germans - I fully expected a battalion of lederhosen to march up to me at the end. It's the way it is.

Last night's gig - See What I'm Talking About with Sean Whelan, Briohny Doyle, Angela Meyer and Barry Dickins - demonstrated something else curious about "my" audience. It seems that I am always a big hit with women of a certain age, to put it delicately. "The best belly laugh I've had in years," said one lovely lady after my set, which was very gratifying, but it can sometimes seem a tad counter-intuitive that, given my (inadvertent) reputation for bad taste and offensiveness, it's the over-50 set that shows such enthusiasm...and it's often the Generation Yers who are po-faced and earnest and...well, eager to complain about my Aborigine jokes.

I suppose that's why I'm a cross between Elvis and Johnny Cash - I'm the poet who appeals to anyone who remembers the 1950s. Although the whole Jesus-necrophilia thing probably would have been ahead of its time back then. 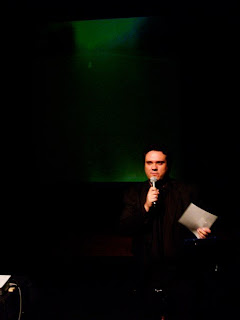 Any plans to bring your distasteful, un-funny brand of comedy to Sydney any time soon?

I'm in Sydney omoroow, but no actual gigs arranged, sadly.

I'm sorry. Maybe we'll bump into each other on a crowded avenue...