If there is one thing I love, it's a larrikin. Know what I mean? A good old-fashioned, mischievous, good-humoured, larrikinish larrikin, the kind of larrikin that made Australia what it is today: i.e. a country full of larrikins.

The trouble, of course, is that although this country is full of larrikins, we are ruled over by a bunch of decided non-larrikins. Our politicians are all so soft and wishy-washy and feminised they wouldn't know larrikinism if it jumped up and shoved a sugar glider down their pants.

However, we need not immerse ourselves entirely in gloom, because there is one man willing to stand up for tradition and patriotism and not-climate change left in our great nation, and that man is Larry Pickering.

Pickering has been one of our greatest larrikins for decades, of course, his larrikinish cartoons bringing joy to millions and keeping alive the larrikin flame that has been burning bright since Gallipoli, when the Anzacs staved off the horrors of war with cheeky japes and drawings of Billy Hughes's cock.

It is in that tradition that Pickering continues to hold the "stuffed shirts" to account on his website, and in particular in brave, truthful-yet-larrikiny pieces like this one, in which he exposes the monstrous threat to our democracy that is Anne Summers and her radical femo-socialist agenda, finally pricking that balloon of man-hating, excessive body hair and mandatory lesbianism that has been hovering over the great southern land ever since Paul Keating rammed through legislation that allowed women to exit buildings.

In the best larrikin tradition, of course, Pickering is not a vindictive man. He is slow to anger, but sharp as a tack and full of boisterous and wittily logical argumentation when roused, and this was no exception. As he writes:

I had never heard of a person called Ann Summers (not sure Ann is with or without an "e" and I couldn't care less really) until she said somewhere that my scribblings were responsible for Jill Meagher's murder.


See how he first demonstrates how he is the bigger man - he had not even heard of Summers, because he has better things to do, like defending our democracy. He emphasises how far above the pettiness of the world by indicating that he doesn't even care how Summers's name is spelt. This is a good sign of a lofty mind.

But then we get to the nub: the reason why any man of good conscience would speak up at this point: Summers accused Larry Pickering of being responsible for Jill Meagher's death.

I just saw television footage of thousands of people walking in a peace march along Sydney Road past Hope Street to honour the memory of Jill Meagher. It was a beautiful sight and a powerful reminder that for all the Alan Joneses of this world, most Australians are decent honourable people who are disgusted by this culture of vilification and violence.


I'm sorry I had to put that on the blog, but you had to know how depraved "radical womanhood" (god Pickering has a way with words) can get. Look at that paragraph. "It was a beautiful sight" she writes. "Most Australians are decent honourable people". "I just saw television footage".

We know what you're saying. You can couch in separatist anarchist neo-Greerist psychobabble all you like, Ann(e), but when you write "disgusted", we can read between the lines: you are saying that Larry Pickering murdered Jill Meagher. We're onto you. What a revolting accusation.

But all good larrikins know how to make freedom-lemonade out of feminazi lemons, and Pickering does so by taking the opportunity to expose the misandry and harridanism at the heart of public life. Having gone to notorious communo-hotbed "The Drum", a website run by the ABC Politburo, Pickering found more of Summers's "work". Like any red-blooded larrikin, Pickering "couldn't bring myself to read it closely", and who could blame him? But reading things is unnecessary to identify radical agendas - indeed it can be counterproductive. The important thing is that in his article he draws, with uncanny plausibility, a direct line between Summers, her big fans Christine Milne and Lee "Uncle Joe" Rhiannon, the plummeting value of Whitehaven Coal shares, Tanya Plibersek's husband-fronted drug operation, child sex, drink-driving, fraud, and prunes. It's a vast conspiracy and it takes a journalistic mind of remarkable acuity to pull it all together so neatly, but that's what Pickering has done, and it's a relief to us all I'm sure that he's manning the parapets as Castle Australia is assaulted by this army of green red pink warmenist homosexual vagina-owning orcs.

And it's those aforementioned prunes, the ones clogging up Summers's reproductive tract, that as Pickering notes, are the whole problem, as they have led to this she-beast breathing fire all over our constitutional rights and causing us to not only have to stand an "elected" prime minister with ill-fitting jackets, but also enabled the violent, financial and sexual crimes of the modern Australian Labor Party. Thanks a lot Anne, you armpit-hair-encouraging, child-molester-enabling, economy-destroying, lipstick-flaunting "writer". You have wrecked Australia and now we may as well live in Afghanistan, if it's not already infested by all the feminists which Larry Pickering's blog commenters wish to send there.

So all power to you, Larry Pickering. You are not only a savvy journalist and a masterful artist, you are a patriot, a freedom fighter, and most improtantly, a larrikin of rare note. Don't listen to those who wish to silence you, who wish to repress the truth. Don't listen when they tag you "sexist" or "misogynist" or "racist" or "insane" or "a bankrupt serial conman" or "a sad old derelict sniggering at his own dick-pictures" or "a rambling maniac who can't even concentrate on one thing for the five minutes it would take to compose a coherent blog post".

Don't listen to any of them, Larry. We TRUE Aussies know what you are, and we salute you for it. As your loyal reader "gungit" notes:

"Why is it all the ugly woman are so prejudiced?" 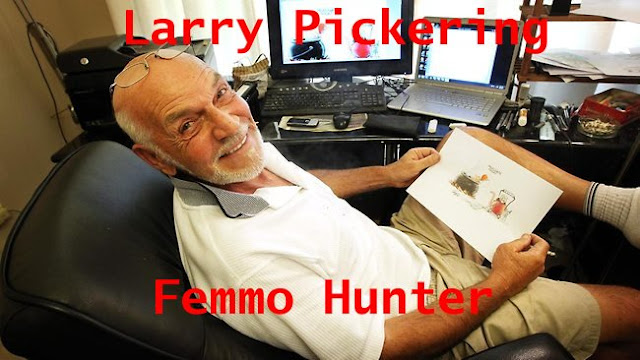 Laz certainly is alive and, as always,

Yay!
But edit that 'improtantly' please. Otherwise, your post is just Perfect.

Wouldn't have anything to do with Anne mentioning Pickering's habit of bombarding Members of federal Parliament with pornographic messages, I suppose. She referred to this in an address to Newcastle University on August 31, 2012.

enjoyed piece, but extremely difficult to read if you don't have 20/20 vision & I'm afraid the underlying image gives the impression that the article is in fact more about the author showing off which, I'm sure, is not the case.

Ben, I found it difficult to see the pictures of the author because of all the writing in front of them. Sort it out, would you?

That was hilarious thank you I hope Ann (e) has read it!!

Love it Ben, LOL funny while skewering Pickering's smut and his anti female 'cause'.